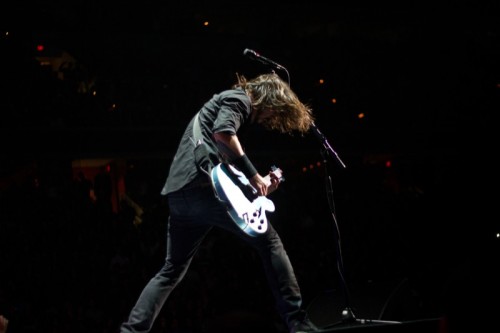 2011 was kind of a weird year for live music. The entire year felt like an odd hang-over from 2010 (one of the greatest years of live music ever). In recent conversations I think I have been undervaluing 2011’s shows, because now as I revisit all of the sets I saw, I realize that there were plenty of great performances, they were just obscured by a lot more mediocre ones than I have seen in recent years. Once I dusted away the humdrum and the disappointing, I was left with about 35 really great sets to choose from for my top ten list this year. 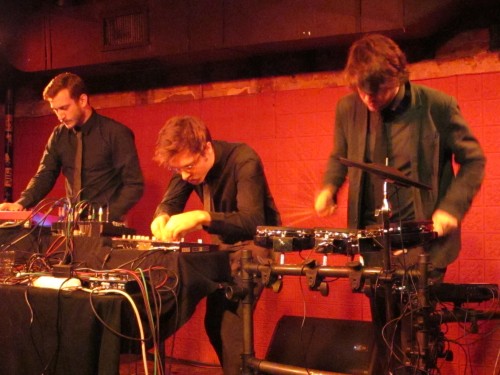 10. Brandt Brauer Frick @ Red Palace: This ‘acoustic’ techno trio proved to be both the most unique and most high-energy of all the dance acts I saw locally in 2011. With their vintage analog synths and self-sampled chamber orchestra sounds these inventive Germans retconned Kraftwerk through the woodshed and I loved every second of it. (Special award for most criminally under-attended, brilliant performance of 2011).

9. The Ex @ Black Cat: Interviewing Andy Moor of The Ex in advance of this show was a personal highlight in my 10 years of writing about music. A landmark moment for me that could only be topped by seeing my favorite post-punk act deliver a blistering performance at the Black Cat. It was fantastic to see their new lead singer Arnold de Boer continue in the tradition of former singer G.W. Sok and wholly surprising to see how his presence reinvigorated this already frenetic group of amazing musicians. “The Ex” by Michael Darpino

8. Liturgy @ DC9: Liturgy’s performance at Comet Ping Pong in 2010 was just shy of making the ten-spot on my best-of list that year. So I was thrilled when they came back to DC not once but twice in 2011! Their cultish “transcendent” spin on Black Metal philosophy combined with their speed-brutality-shoegazer sound makes Liturgy one of the most interesting American metal acts around. While I’ve absolutely loved all three times I have seen them, it was the second set at DC9 that really sticks out as the best for me. DC9 was the perfect setting for Liturgy’s “transcendence through sonic annihilation”-thing to really work for me. For a band that is always intense to watch, this performance at DC9 had an atmosphere that took it to a higher level.

7. Kyuss Lives! @ 930 Club: Before The DPD Project, I could not have told you a single Kyuss song. After The DPD Project, I could sing along to almost all of them. This highly influential 90’s stoner metal act was long gone by the time my cohorts introduced me to them and after they did, I never imagined the chance to see them in concert would ever present itself. Under the moniker Kyuss Lives! (to acknowledge the absence of their most famous former member, Josh Homme) 3/4 of the original Kyuss line-up along a brilliant Bruno Fevery on guitar transformed the 9:30 Club into a southern-Cali desert camp site and rocked the heavens for two hours. John Garcia’s voice was everything we secretly hoped it would be; and the instrumental prowess of the band was off the charts. I walked away from the show in a daze, thinking to myself that it would be hard to imagine them having sounded better during their original run in the early-90’s. 6. Clutch @ Red Palace: A free show from one of the area’s most respected and bad-ass rock bands in one of DC’s tiniest performance spaces + the debut of a really strong new beer named after the them, resulted in one of the most fun concert experiences of the year. The atmosphere amongst the small crowd of lucky fans was electric, the beer was delicious, and Clutch delivered an amazing blend of acoustic arrangements and plugged-in jam versions of some of their best material.

5. The Foo Fighters @ Verizon Center: For epic rock showmanship in 2011, it did not get better or more heartfelt than Dave Grohl of The Foo Fighters. This show was ridiculously good. So good that it defied all of my (low) expectations and melted my frozen Grinch heart just long enough for me to fall under the spell of their big, mainstream rock sound for the night. This show was a three hour monster and was packed with so many genius rock gimmicks, guest-spots, solos, and song re-arrangements that I am still sorting through them. The only reason that this show does not place higher here is that the more distance I get from it, the more my momentary connection to their actual songs fades. 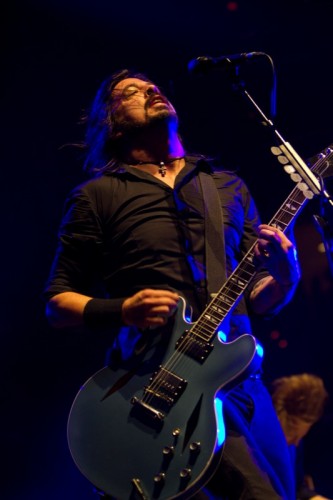 4. Dillinger Escape Plan @ 930 Club: From various conversations I have had around town, I know I am in the minority of opinions in thinking DEP totally stole the show from Mastodon last year. DEP worked the room better than Mastodon and utilized the 9:30 Club sound system like it was the return of a long lost member of the band.** This was a great, great double-bill and I fully expected to enjoy both bands (which I did) but I was totally flabbergasted by how tight Dillinger Escape Plan sounded. Any band that can be that spastic AND that technically precise in a live show gets huge respect from me. While the median age of their average listener skews much younger than me, I was still all smiles during their 40-minutes of amp-tower jumping, emo-screaming, complex as advanced algebra, controlled chaos.

3. Little Dragon @ State Theater: I really talked Little Dragon up before their show at the Black Cat in the beginning of 2011. I was still high on their magical, festival-stealing performance on a Coachella side-stage in 2010. The Black Cat show turned out to be a fun one but it had a terrible warm-up act, was mired by technical difficulties, and the crowd was full of jerks. All told it was a nice show, but could have been better. So when Little Dragon made a swing through the area to play The State Theater in June, I kept the hype low. Of course now I wish I hadn’t. Everything magical about their Coachella performance that was missing at the Black Cat show, was back with a vengeance for their State Theater set. The sheer joy of this set can’t really be expressed in words (which is why I didn’t review it originally) so I’ll simply let its high ranking on this list speak for itself. 2. Kid Congo Powers and The Pink Monkey Birds @ Comet Ping Pong: It takes a ton of charisma and a heap of charm to make the back room at Comet Ping Pong the coolest, classiest, oddest spot on the planet and that is exactly what the mighty Kid Congo Powers did in early 2011, when he and his band performed as the opening act for Chain & The Gang. Their set of goofy, spooky, rockabilly, surf punk was a sheer delight that simultaneously tapped into multiple generations of basic rock principles to tickle the universal good music receptors in the brain of every human in the room. This set was so off-beat, good-natured, and down-right fun that as soon as it ended I knew it would easily trump 80% of what I would see the rest of the year.

1. Meek Is Murder @ Firehouse Grill: And so this is what it is all about. A random room in Fairfax, a bunch of bands almost no one has heard of, and a crowd so small it is easily outnumbered by the members of all the bands on the bill. The absolute joy of discovering an amazing new band well ahead of the curve and then spreading the word about them to every ear that will listen or eye that can read. It’s also about that gut feeling that gets me to go to these kinds of shows and the exhilaration of being rewarded by a set of music nirvana in one of the most unlikely places I can think of. Ever since I started ranking the concerts that I see each year, my criteria for the number one slot has been music nirvana; that eyes closed, ears open, transcendent spot when hearing music replaces ever other sense I’ve got. Not many bands can take it to that level, but the few that do…damn are they special. Last year it took just about the biggest band on the planet to take me there. This year it was a little known indie-metal band from Brooklyn called Meek Is Murder. As I reflect on the past year of live music, I almost can’t believe that this tiny show in Fairfax is the one I keep coming back to as the best one I saw. But I can’t deny that it was. As big as The Foo Fighters or as legendary as Kyuss or as favorite to me as The Ex all are; it was Meek Is Murder and their incendiary sonics, passionate rage, and unpolished performance that takes the top prize. Check them out! “Meek Is Murder” by Michael Darpino

* I know, I know – why is this article a week late? – see paragraph two.
** No hard feelings Mastodon!