“Because we had to fire Flip.”

“He didn’t do anything wrong.”

Flip Saunders may have not done anything wrong, but he certainly didn’t do anything right. In one way Flip will be the fall guy for another failed Wizards season, but in another way Flip was never the answer at coach, leaving with a 51-130 coaching record in Washington.

Time after time I’ve seen that sleepy-eyed look at press conferences. Time after time I’ve heard him expound on how players are holding on to the ball too much or how they throw the game plan out the window after they fall behind. Perhaps the problems were easier said than done.

You can say Flip took on a job he didn’t sign up for. He was suppose to help squeeze one more season from the old guard of Arenas, Butler, and Jamison. He wasn’t originally brought in to coach a team full of first and second year players.

In reality Flip never had control of the locker room. It got out of hand to the point Gilbert was offering firearms to his teammates. Flip was then left with a class of kids who tuned him out.

Regardless of the reason, Flip is out and Randy Wittman is in- but will that be a difference?

The former guard who was first drafted by the Washington Bullets and played with the likes of Doc Rivers and Spud Webb doesn’t have the most impressive coaching record. In fact if there’s anything we are sure about it’s that Wittman doesn’t really want to be a head coach again.

“I didn’t come here to Washington to be the coach. I came here to help [Flip],” Wittman said in his first press conference as coach. A familiar line because it was the same one I heard when I covered a game last season where Wittman was filling in while Saunders was attending to a family matter.

However this time around he added, “I would’ve walked with him if I didn’t believe that this team can be better than what we are.”

In the press conference he certainly said the right things: finding a style that fits our players, making them take more accountability, playing a more up-tempo game.

He also started the Wittman-era with a win at home over the Charlotte Bobcats- and an analogy that the team was a pack of chain-smokers. Nothing like crazy coach-speak to get the team buzzing in the media.

He followed up his win with an absolute beating to the Houston Rockets and a visit to Charlotte to end the weekend with the team’s first road win.

Thank goodness that there’s a team worse than the Wizards, who knows what we’d be saying if Wittman started his reign 0-3.

In his first three games the team has averaged 98.3 possessions per game compared to 95.2 in the 17 before that. It’s a bit early but it looks like the Wizards are on their way to playing more up-tempo ball.

Wittman has also shaken up the starting line-up, giving rookie Jan Vesely a start against Houston at the expense of Andray Blatche. Thanks to a calf injury, Wittman may have an excuse to keep Blatche on the bench.

Despite the 2-1 start to the Wittman era, you have to take the success with a grain a salt when the two wins were over a team that looks more lost than the Wizards. The Bobcats are second to last in the league in offensive efficiency.

Only the Wizards are worse.

The real test will be how Wittman can play the team against the Chicago Bulls tonight at the Verizon Center. I’m not very positive about the outcome.

There are two things that need to happen if the Wizards are to successfully rebuild: get rid of the knuckleheads on the team- and no, it wasn’t fixed when Arenas was traded to Orlando.

Andray Blatche has gone from a head case to a player who can’t get the crowd’s boos out of his head.

JaVale McGee only cares about blocks, dunks, and whatever else gets him highlights on SportsCenter. It’s funny that he works so hard to get attention but doesn’t like it when he does. He sulked after the media got on top of him over his off the backboard dunk and according to Twitter he wishes to avoid a “media friendzy.”

I don’t care what his mom says, McGee is a talented player- but lacks the attitude to be a true winner.

The old guard of locker room cancers maybe gone but more steps need to be taken before we experience a relapse. That’s why so many people are calling for the team to be blown up- again.

Randy Wittman is not that coach.

He’s a silent guardian of what will remain of the Flip Saunders era before that house is cleaned as well, a watchful protector of yet another NBA lottery pick. A dark knight that has held the title of Head Coach before, but doesn’t want it again.

Randy Wittman is not the coach we need. He’s simply a stop-gap, the coach DC deserves. 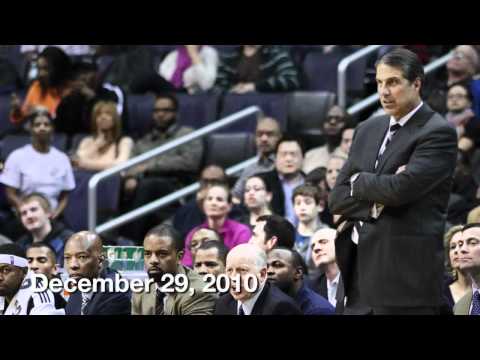 4 thoughts on “Randy Wittman: The Coach Washington Deserves, But Not The One It Needs”