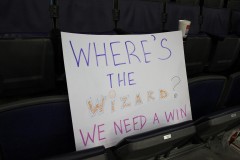 In between the 3rd and 4th quarter of today’s Washington Wizards match against the Houston Rockets, Steve Miller Band’s “Fly Like An Eagle” filled the Verizon Center. I thought it was fitting since it is the first track on the Space Jam soundtrack and coach Flip Saunders recently commented that the team, “looked like ‘Space Jam’ where everyone lost all their talents and couldn’t do anything there for a while.”

Listening to those lyrics it was very clear that for the Wizards time was indeed slipping as the Wizards lost the game 106-114.

John Wall reached a career high 38 points including 18 in the final quarter but the Wizards couldn’t catch back up after keeping it competitive in the first half. Wall looked aggressive, attacked the hoop, and landed a spectacular dunk in the third quarter.

Wall wasn’t the only Wizards slamming the boards today, JaVale McGee had several highlight worthy finishes including a second half dunk that caught Flip’s eye- not for good reason however.

With 9:32 left in the third quarter McGee took a fast break across the court and shot the ball into the backboard, catching the rebound for the dunk.

UPDATE – Video of the dunk:

The self alley-oop occurred when the Wizards were behind 58-64 and Coach Saunders wasn’t too happy with the showboating.

“I told [McGee] that’s unacceptable,” Saunders said after the game, “maybe I’m too old school but save that for the All Star Game- not during a game.” Saunders went on to say that he thought there were some players on the team that look for highlights rather than substance. He offered Jan Vesely as a player that played with substance. Saunders also recognized Andray Blatche’s (back from a shoulder injury) performance, commenting that it was some of the hardest playing he’s seen from him in a couple of years. Blatche went 4-8 with 11 points and 12 rebounds.

McGee on the other hand thought there was nothing wrong with his dunk.

“Apparently if you get a fast break and you throw it off the backboard in the third quarter and you’re 1-11 you’re not supposed to do stuff like that,” McGee said in the locker room post-game, “I feel I was just trying to get the team hyped and trying to make a good play.”

Just another case of JaVale being JaVale. All the highlight dunks and blocks mean nothing if the end result if a loss.

Four players on the Rockets reached double-digit points. Houston was led by Kevin Martin (25 pts)- Samuel Dalembert (20), Luis Scola (18), and Kyle Lowry (16) were also in the double for points.

After a strong effort game against the Knicks and a win against the Raptors last Tuesday, the team is still searching for some consistent performance from all of their players in a game- not just one or two players. This week the Wizards will take on Oklahoma City, Denver, and Boston- all teams that Washington will need all hands on deck in order to keep pace.