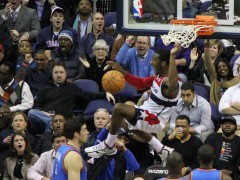 This quote was posted inside the Wizards locker room tonight, very apropos for the game. The Wizards came in tonight as the worst team in the NBA at 1-12, facing off against the best team in the NBA in the 12-2 Oklahoma City Thunder. The Verizon Center was packed with fans that wanted see Baltimore’s own Kevin Durant, and expected a big game from him against the Wizards. Boos came from all directions at Andray Blatche, who has lost all respect with the fans. It wasn’t shaping up to be a good night for the Wiz.

But tonight the Washington Professional Basketball Team demonstrated that they could compete with the best of the best in a thrilling victory over the Thunder 105-102.

“Usually [The Thunder] intimidate you and we showed, our whole team showed, that we weren’t going to be intimated tonight,” coach Flip Saunders said after the game. After Monday’s loss to Houston, he commented that he wanted to see strong performances from three or four players- not just one or two.

Well he got a complete team performance tonight: John Wall led the team with 25 points followed by Nick Young with 24. Jordan Crawford got on the board with 18 points and Andray Blatche fought the boos and put up 12 points of his own.

The entire night the fans inside the Verizon Center appeared determine to boo anything Blatche did- good or bad. Threw up an airball? Boos. Drained a three? Boos. Blatche tried hard not to let the fans get to him.

“They were just in my head- just in my head,” he said to reporters after the game. Andray added that his teammates including Roger Mason Jr. helped him through the boobirds.

“These fans pay a lot of money to come see their team play they have the right to do whatever they want to do,” Mason said when I asked him about the boos for Blatche. Mason and others feel that Blatche is playing differently ever since returning to the court from a should injury.

“Since he’s come back from his injury, he’s trying to play the right way- he’s playing with a good amount of energy, he’s playing team basketball.”

Oklahoma started the game as if they were already looking ahead to the next. Kevin Durant and the high-scoring offense of the Thunder appeared slow to start in the first half. The Wizards’ plan against OKC was to contain them- not stop them.

“We wanted to try and contain [Harden, Westbrook, Durant] as much as possible but eliminate all the other guys and not let, outside of Harden, not let anybody get 8,10,12 [points],” Saunders explained.

The plan appears to have worked, Russell Westbrook led OKC with 36 points and Kevin Durant followed-up with a total 33 points for the night. However outside of them the next best scorer was James Harden with 13 points.

Is this a turning point for the Wizards? We’ll see on Friday when the team take on the Denver Nuggets, but John Wall is confident that the team has turned a corner.

“We know we’re better than our record is.” 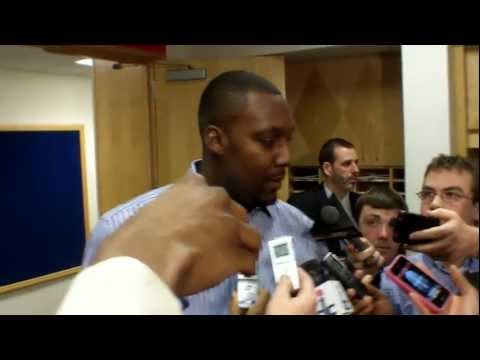