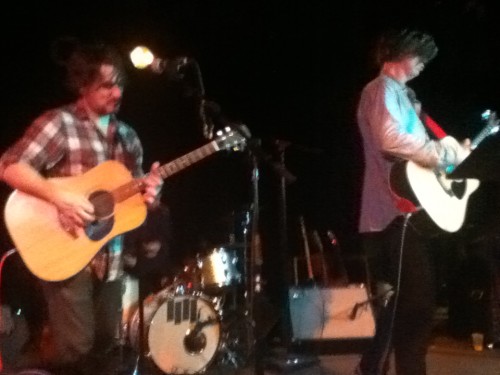 At Monday night’s Black Cat show Thurston Moore  dished out jokes about Dischord house, stories about Black Flag, Jello Biafra, conspiracy theories about Jimmy Carter, credited Reagan for the birth of Hardcore, and had a gin & tonic chugging contest with his guitarist. Oh yeah, and played some amazing music too.

Moore, frontman of the iconic experimental/noise/post-punk band Sonic Youth is on tour in support of his latest solo album Demolished Thoughts, released in 2011 on Matador. He brought with him fellow Matador recording artist Kurt Vile, as well as a band on his own label, Ecstatic Peace Records – Hush Arbors, which features his touring guitarist, Keith Wood.

Kurt Vile took the stage by himself, sitting on a chair in the middle of the stage, acoustic guitar in one hand, bottle of wine in the other. His set was quiet, understated, but really beautiful. Beginning with “Laughing Stock,”  from his 2011 EP So Outta Reach, he drew the listeners in and set the mood with hypnotic guitar and delay-drenched vocals.

His set was filled mostly with songs from his 2011 album Smoke Ring For My Halo, and  from his 2009 album Childish Prodigy. Some highlights included “Peeping Tomboy”, and “Heart Attack.” He was joined onstage a few times by guitarist Jesse Turbo, who added depth and echoing layers with electric guitar, on “Hunchback” and “He’s Alright.” He was also joined by harpist Mary Lattimore for a couple songs, whose beautiful plucking added texture and soft beauty to the songs, including “Ghost Town.” 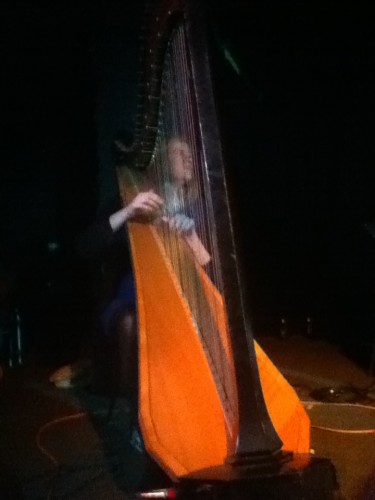 When Thurston Moore came onstage wearing a suit and carrying an acoustic guitar, I wasn’t sure what was in store. I listened to some of his most recent album, Demolished Thoughts in the week leading up to the show, and found what I heard beautiful and mellow, reminiscent at times of the quieter moments of the Velvet Underground. A far cry from the Sonic Youth that I’ve loved for most of my life, but awesome in it’s own right. (I’m a big Sonic Youth fan, and have seen them live probably more than any other band over the years. I’ve lost count…) Anyway, from the beginning Moore seemed at home onstage, talking to the crowd and joking about the band being called the Jimmy Carter Youth Patrol. (He went on tirade later about Jimmy Carter, but it’s funny because as he gets older he looks more and more like the former peanut-farmer President.)

Moore was joined by guitarist Keith Wood, harpist Mary Lattimore, violinist Samara Lubelski, and drummer John Maloney.  He introduced the first song, “Orchard Street,” saying “This song was written after an all-night weed smoking session at Dischord House.” (Here it seems he was poking fun at his long-time friend Ian MacKaye, frontman of Fugazi, co-founder of Dischord, and well-known as straight-edge.) The song started out pretty mellow, but ended up building into an amazing acoustic wall-of-sound; everyone on stage madly strumming/bowing/beating on their respective instruments for a jammed out ending that lasted several minutes, assuring us Sonic Youth fans that yes, there would be noise. 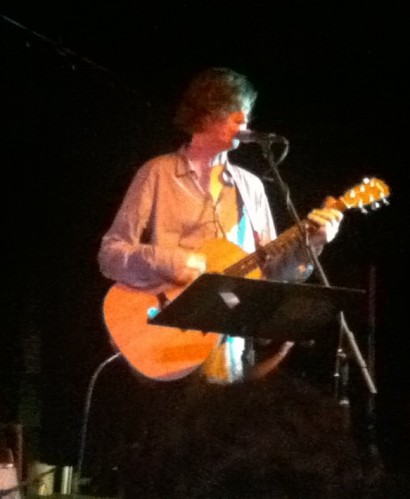 Pretty soon into the set, clearly warmed up, he shed his suit-coat and tie, and shared about a time early on in his performing career when he made the mistake of wearing long-underwear onstage. A mistake he did not repeat.  A musically lighthearted, upbeat moment came with “Fri/End”, from Moore’s 2007 album trees outside the academy. Here Moore played a lush-sounding 12 -string guitar deftly, and after proclaimed that “soft rock is the new hardcore.” I’ll leave that one alone, but he certainly was able to translate a very mellow album into an exciting and vibrant live show.

Two high points came from his 1995 album Psychic Hearts- the discordant, almost grating “Queen Bee and Her Pals,” and  “Ono Soul.” In between some songs Moore read some poetry, and told stories. I could have listened to his stories for the whole night. One recounted a time when he was at a Black Flag show in New York. He was taping the show (mock shock!) and there was this great expansive droning/feedback going on, which he was really digging, and then Lee Ranaldo (long-time friend and one of the co-founding members of Sonic Youth) ran up to him, super-excited and shouted how they needed to make a whole album that was just this droning noise. All he could think at the time was how Lee had just screwed up his tape of the show, but in retrospect he thought it was pretty cool to have that moment captured on tape, excited blurt and everything.

Moore and his pals ended up playing a pretty long set that didn’t feel long at all.  And he managed to do what he does every time I’ve seen him play live- renew and reinvigorate my faith in and love of music.