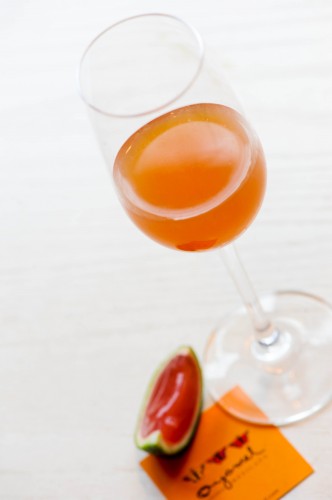 It is ARTINI season – which might just be the happiest season of all for your We Love DC lushes, who think a combination of fine art and fine cocktails is pretty hard to beat.

Hosted by the 1869 Society to benefit the Corcoran Gallery of Art’s “ArtReach” education programs, the ARTINI gala on March 31st is an annual event not to be missed. ** Eleven of DC’s best mixologists will engage in a friendly competition to make drinks inspired by impressive artworks from the Corcoran’s collection.

Throughout the month of March, these drinks are available on Feature Nights at each participating bar, with a portion of the proceeds going to the Corcoran. During these opportunities to sample, the public can also vote for their favorite among the drinks. The Drinks Team will be tasting them all and posting our thoughts here in weekly round-ups – and we encourage you to visit each bar and taste along with us. 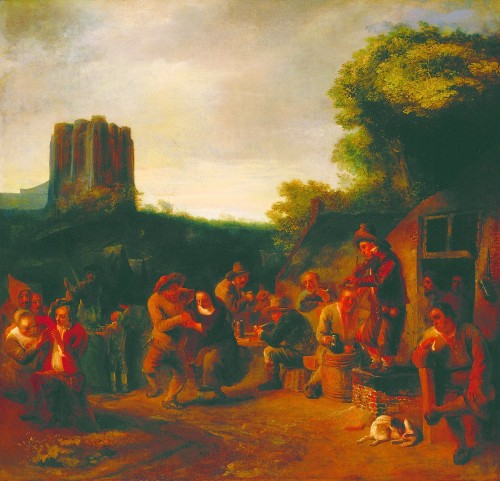 Joe Cleveland seemed almost giddy as he zipped around behind the small bar at Oyamel – though as delighted as he seemed when describing his creation, that could also just have been a response to handling a crowd packed three and four deep on the opening ARTINI feature night. The “Alegria” is a Congac-based drink, which Cleveland says he rarely gets to use at the Mexican restaurant, though he did managed to slip some Herradura Anejo, Cointreau, and bright, fresh citrus in with the Remy Martin and Chartruese to keep it more or less in line with their usual flavors. The Congac had a nice, evolving finish and delicate mouthfeel that was almost suggestive of subtle effervescence though the drink is perfectly still. Alongside the main drink, he served a terribly classy take on a jelly shot in a tidy hollowed-out lime wedge. Between the firm yet yielding texture, orange color, and the spicy dusting with chile powder the shot reminded me immediately of the little paper cones of mango slices with chile I used to buy on the street in Los Angeles. It was a supple – and pleasantly non-cloying – delight which almost overshadowed the main attraction, though it did require extra hands and I have some concerns about how it might work at a crowded gala setting (expect me to be the klutzy woman with orange jelly on her cocktail dress). I loved that Oyamel handed out a card with a photo of the artwork so one could ponder it while sipping – but unfortunately, beyond an orangish color, I am not sure they shared much directly in common visually. However, when it comes to “conviviality,” encouraging people to two-fist and jelly-shoot might be right on point.

As I was leaving Jack Rose I told Rachel Sergi she was my front runner for this year’s ARTINI, but that I’d only had her cocktail so far. Inspired by Frederic Edwin Church’s 1857 oil-on-canvas Niagara (which is just what you might imagine from its title), the Threshold is made from fresh blueberry and green apple juice, Herradura silver tequila, and Bittermens ‘Elemakule Tiki Bitters (bottled magic), and then topped with Jack Daniels Tennessee Honey foam (Sergi and bartender Amy Russell were busy all night with an immersion blender, keeping the foam properly whipped for each cocktail). The perfume-and-spice je-ne-sais-quoi of the Tiki bitters balances surprisingly well with the fresh juices, and the cocktail is well more than the sum of its parts. If pressed I could complain that the texture would have benefitted from the use of a fine mesh strainer, but the flavor more than makes up for that flaw. 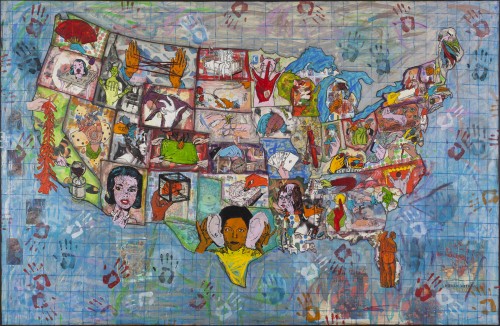 ARTINI’s mandate is a challenging one: it’s not just to create an original cocktail, but to create a cocktail inspired by an artwork in the Corcoran’s collection. Inspiration is personal, after all, and one person’s response to art may be very different from another. Jane Hammond’s Hand Held (1996, oil and mixed media on canvas) is full of intensely vibrant color, using her signature pictorial images to create a map of the United States, with a quirky effect rather like a patchwork quilt. So when Sam Haltiwanger placed a brown drink with a single star anise in front of me, it was a jarring first impression. Ardeo did not have an image of Hammond’s work on display at their Feature Night this past Wednesday, so that disconnect may not have been everyone’s that night. Sam pleasantly explained that he started with a rum base as an homage to America’s colonial past, then added a cider and brown sugar reduction to allude to “American apple pie,” and rounded it out with lime, ginger, and habanero to bring in the country’s modern diversity. As a cocktail, it’s a nice sip of sweet and spice, but its finish seems too watery – serving it on-the-rocks dilutes the taste too much. As an artini, it’s a subtle interpretation, but perhaps a bit of a stretch to relate it to Hammond’s zany, explosive artwork.

2 thoughts on “ARTINI: Week One Features”