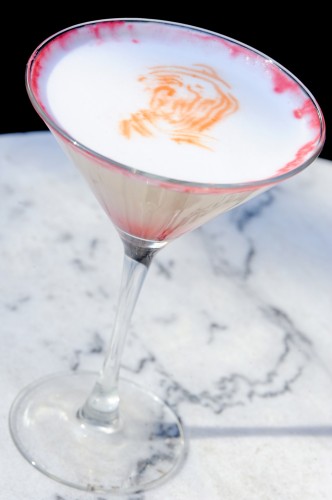 Frank Jones of The Gibson for ARTINI 2012. Photo credit: Dan Swartz. Courtesy of the Corcoran Gallery of Art.

ARTINI 2012 is underway!** Eleven talented bartenders have created cocktails inspired by works in the Corcoran Gallery of Art. Every Friday the We Love DC drinks team will wrap up the week’s feature nights with reviews of each ARTINI entry, to culminate at the gala on March 31st. Check out our notes from Week One and Week Two – and find out what we thought of Week Three.

Chantal Tseng’s Horsefeather, inspired by Alexander Phimister Proctor’s 1918 bronze, Indian Warrior, comes with a story of its concept. It “… represents a kind of pre-battle elixir, kind of like an offering to the warrior gods.” It’s a tasty concoction of Mount Gay rum, echinacea root tea, lime juice, honey syrup, molasses, and allspice dram, garnished with a slice of “charred spiced dried apple” (which was flamed on the spot). Oh, and it was served with a side of smoked hickory and roasted coconut popcorn. Chantal’s description of the drink is apt. The elements of smoke, spice, and earth (in the apple, tea, and molasses) bring visions of the warrior himself to life. Of the three ARTINIs I’ve had so far, its taste is most evocative of its inspiration, although Rachel Sergi’s Niagara was more visually apt. I’ll be very curious which approach the ARTINI judges prefer. 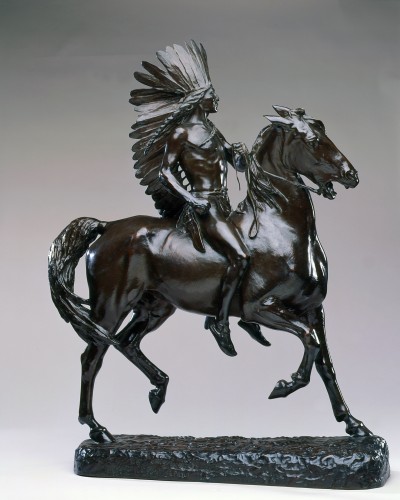 We have seen some ARTINI drinks that are creative, sophisticated, and clever, prepared with deliberate speed by a careful bartender – but wondered how well that same drink would translate to hundreds of party-goers queued up at a gala, hoping to get their hands on a drink. El Centro’s team has got an edge in that department. On a lovely spring night, they were slinging out the cocktail to a jam-packed rooftop and nobody had to wait very long. The drink is pretty, too, with sunset-colored layers of pink and purple at the bottom of the glass (cranberry juice and creme de violet) below a pale cloudy colored layer – all of which seemed very fitting given the drink’s inspiration, a ceiling mural with lots of ethereal imagery. The motif of the four seasons particularly informed the drink, according to a sign hung up by the bar. Unfortunately, this eight-ingredient concoction, while quick to make and pretty to see, did not quite excite on taste like some of the other ARTINIs. The drink was cloyingly sweet – Cointreau and syrup and Squirt grapefruit soda and so on – and the chili, ginger, and tequila flavors I expected from the drink’s description really did not come through strongly enough to be enjoyable. 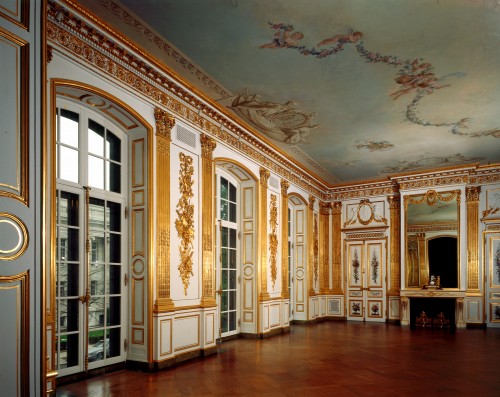 It was perfect to go to El Centro and Smith Commons back to back this week, because the ARTINI from these two places were almost perfect opposites in every way. “Smoke Over Manhattan,” crafted by Smith Commons bartender Andy Bixby in collaboration with Lead Mixologist Phil Peters is my easy favorite of the drinks I have tasted so far. This drink delivered on both visual and taste appeal, did so with a bit of style and ambition, but balanced accessibility to the casual sampler with experimentation for the connoisseur — all just like a great art gallery. When I arrived at Smith Commons, the place was comfortably populated but with space remaining at the bar – which is almost unprecedented in my now two years of fighting the crowds at ARTINI feature nights. It would seem that a lot of ARTINI tasters decided to skip the lone H Street NE outpost on this year’s line up – but that worked out for me because I was able to sit there and stare, mesmerized, as Andy meticulously squeezed droplets of vermouth into a sphereification fluid to create tiny beads of “vermouth caviar.” (There are those who will stop here saying this kind of entry-level molecular gastronomy is très passé. To them, I say: it is still fun, it tastes good, and I will take it over Squirt any day.) These would settle at the bottom of the glass of this deconstructed take on a Manhattan. The cherry is represented by a puff of stabilized darkened cherry brandy foam, floating on top of the drink and gently dissolving in as the drink progresses. For the whiskey in the body of the cocktail, Phil and Andy applewood-smoked a batch of the Jack Daniels Tennessee Honey Whiskey (a sponsor of the event – all ARTINIs include at least one), and then combined it back with a splash of the un-smoked honey whiskey and a portion of Bulleit Bourbon. The smoke is a direct visual and taste reference to the puffs of smoke in the painting, as is a glassy, amber-colored apple sugar candy stick made to evoke the hay in the image. It is placed in the drink and can be used as a stirrer – a shiny, light contrast in a drink that is otherwise a deep, opaque, greyish eggplant color. The scent of honey was incredibly strong in the drink – one could easily smell honey even from across the bar – but in the flavor it was apparent without being sticky. The smoke really mellowed and deepened the flavor and it integrated well with the bourbon. A really sophisticated, multi-faceted interpretation of the artwork, smokey bourbon, fun, mouth-bursting jelly vermouth balls, and a gorgeous visual – this ARTINI will be very hard to beat and it left me wanting to head back to Smith Commons more often to see what else they have up their creative sleeves. 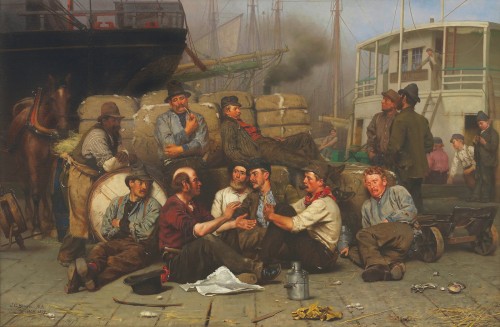