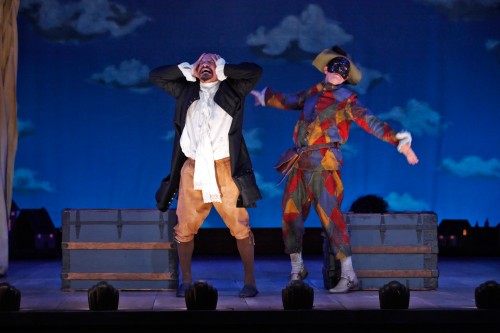 Jesse J. Perez as Florindo and Steven Epp as Truffaldino in Yale Repertory Theatre’s 2010 production of The Servant of Two Masters, directed by Christopher Bayes. Photo by Richard Termine.

When the lights at the Lansburgh Theatre go down and The Servant of Two Masters begins, you know within seconds you’re at a play. Gone is the predictable 9-5 workday, the awkwardness of happy hour networking, the pressures of politics and power struggles. It’s play time, and as such you are invited to loosen your tie, let your hair down, and prepare for an ab workout only laughter can provide.

As a classic example of commedia dell’arte by Italy’s beloved Carlo Goldoni, The Servant of Two Masters relies on only the basic outline of a plot: a young couple wants to get married, but complications arise that prevent them from tying the knot. When a servant arrives to help sort out the problem, he inevitably makes everything worse by attempting to work two jobs at once.

The production arrives at the Shakespeare Theatre Company in DC after a sold out run at the Yale Repertory Theatre. Under the imaginative direction of Christopher Bayes, the show combines every element you could hope for from a night at the theater. It spans the gamut from breathtaking theatricality and poetic abandon to musical numbers and crass improv comedy.

An incredibly physical show, The Servant of Two Masters is not a relaxing affair. Actors end scenes drenched in sweat, and jokes happen so quickly you sometimes have to hold on for dear life. The night I attended, a wardrobe malfunction split Pantalone’s pants. Allen Gilmore, in and out of character as Pantalone, used the moment to show off his improv chops. As the audience wailed with laughter, the other performers on stage, including the musicians, took a moment to figure out how they could possibly get back into character and end the scene. The moment served as a reminder of how physically demanding the show really is, and thus how unpredictable too.

The staging requires intense control over one’s movement, and most of the performers have it in droves. In particular Steven Epp, in the lead role of Truffaldino the servant, shows great body control in his very physical role and uses such a range of comedy throughout the night that at some points he plays the standup comedian and at others the slapstick buffoon. As Beatrice – a woman in disguise searching for her lost love – Rachel Spencer Hewitt also shows tremendous control and has a commanding presence as a result. It was hard not to watch her every moment she was on stage. In the role of her flamboyant lover, Jesse Perez masters Florindo with hilarious and absurd heights of passion.

Any show with this many attempts at comedy would be unbearable if done poorly. Fortunately for us, the cast’s timing is impeccable. They play with expectations so well and so constantly that you’re forever on your toes wondering what will come next. Their use of DC-relevant comedy particularly stands out, and two the onstage musicians have a few scene-stealing moments as well.

By the end of The Servant of Two Masters, most everyone is exhausted. The cast runs out for the curtain call with a large sigh while beads of sweat shine off their faces; but it’s the good kind of tired. For a few hours, nothing else matters but the wondrous distraction on stage. Sure your abs hurt and the jokes, which entranced you moments before, have already been lost in a sea of memories and other concerns; but for that short time in the Lansburgh Theatre, you get to join in the chaos and be reminded that love, as in life, is best when unpredictable.