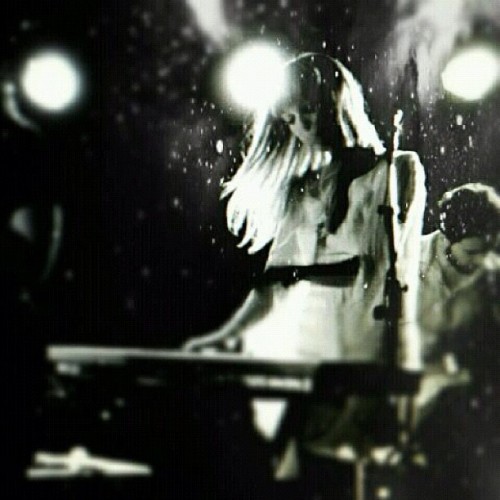 Laura: After Georgie James broke up, I decided I wanted to try out a whole different scene. I love DC and it’ll always be my home. But sometimes you need distance to get perspective in your life. The move to Omaha surprised some people, I know. (New York, LA or even Portland would’ve been more expected for a musician.) But I chose Omaha for the good friends I’d made through working with Saddle Creek — and the great arts scene that’s going on there. 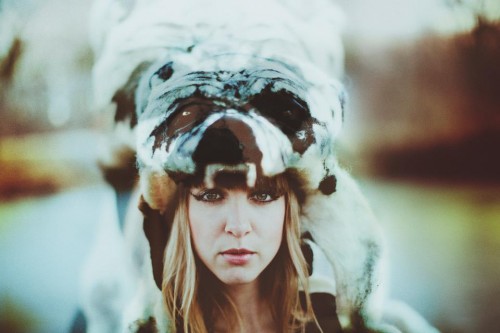 Alexia: How did The Mynabirds come about?

Laura: I had recorded the first album (What We Lose In The Fire We Gain In The Flood) with Richard Swift as a solo set of songs, unsure of whether I’d release it under my own name or under a band name. I had told Swift I wanted the record to sound like Neil Young doing Motown. Exploring some names, I thought that The Mynabirds had a nice ring to it. I even ran it by Ian Svenonius one night and he agreed. When I googled the name and saw that a similar band — The Mynah Birds — came up and it was none other than Neil Young and Rick James signed to Motown, it seemed fated to be. I only hoped Neil and Motown wouldn’t sue me. I’d like to think the rerelease of Mynah singles on 7″ for this year’s Record Store Day had a little to do with us — we helped aid in the revival.

Alexia: You have done some extensive touring with Bright Eyes- was that the biggest tour you’ve done? What was that like? How did you come to play with Bright Eyes? Any favorite stories from that touring experience?

Laura: That was the biggest tour I’ve done, yes. Playing Radio City and The Royal Albert Hall were really incredible highlights of my life, for sure. And I just love that whole band and crew. True sweethearts. Conor asked me to join them on the road after I’d laid some vocals down on some songs on the new record. It was an honor to be asked. The whole year was such an adventure, it’s hard to pick just one favorite moment. Playing SXSW with fireworks exploding from the river behind us on the night of the Super Moon was pretty fantastic. And so was learning to surf with TV on the Radio in Australia when we did a traveling tour with them (and the Flaming Lips, Portishead, and the National).

Alexia: Can you tell us about your New Revolutionists project?

Laura: It’s a portrait project I started in conjunction with the new record, but it doesn’t necessarily belong to me. It was born out of my considering Richard Avedon’s photo “The Generals of the Daughters of the American Revolution” and the sharp contrast of what I think modern revolutionary women look like. They might not be making headlines, but they’re tirelessly chilling away at the mountains of important work in their own communities. They get their hands dirty; they’re more than willing to roll up their sleeves. My favorite part about the project is that it’s a nominative process, meaning that each women featured has been nominated by someone else. Nominations are open for anyone to make. So if you know someone you think is particularly revolutionary, please nominate her! There’s a simple email form right on the website. I just love seeing how this project is growing out to include a vast and varied web of women doing things on every level — mothers, teachers, social workers, doctors, artists — even simple acts of loving kindess to your neighbors can be revolutionary in this day and age.

One more thing — doing this in an election year was also sort of my own little protest against all of the money being pissed away in political contests. We talk a lot about how much debt we’re in as a country, but can somehow find millions of dollars to run attack ad campaigns. It’s also amazing to me that we can’t find the money for universal healthcare, but can find a way to foot the bills for endless wars. I decided to look it up a couple years back, and the price tag on universal healthcare was a trillion dollars — conveniently the same amount we’d spent on the war on terror to date. We have resources, we just choose how to spend them in very destructive ways.

Alexia: What was the experience like making this Mynabirds album? How was it compared to your previous writing/recording experiences?

Laura: It was an amazing time in the studio with Richard Swift, yet again. Since making the first record, we’d become really close friends — he even came on tour with the Mynabirds when we opened some shows for Bright Eyes in the spring of 2011. We had fun experimenting with sounds and ideas on this record and took things in about a million different directions. When I said I wanted to play a five gallon bucket on one song as a nod to DC Go-Go, he took me straight to the hardware store to pick it up, no questions asked. That said, he also took care of me when I lost my voice (completely!) from overuse and exhaustion and international touring. We did about a week-long juice cleanse together. And we also had our fair share of late-night whiskey dance parties, too. Speaking of, those two weeks of Myna/Bright Eyes were some of my favorite weeks of my life.

Alexia: Who are you listening to these days?

Laura: I’ve been exploring my classic record collection recently. And on the road, there’s nothing finer than good sing-along songs. Fleetwood Mac might’ve already been played a million times, but we’re all happy to listen to Rumours one more time. And sing our hearts out.

Alexia: The future looks bright! What’s on the horizon for The Mynabirds?

Laura: Endless touring! We’ll be around the US at least twice by the end of the year. And over to Europe. And hopefully there’ll be some other good happy surprises in there, too.

Welcome Laura home this Saturday, June 23rd when she plays with her band The Mynabirds on the main stage of the Black Cat! You can check out The Mynabirds’ new video for Generals here!