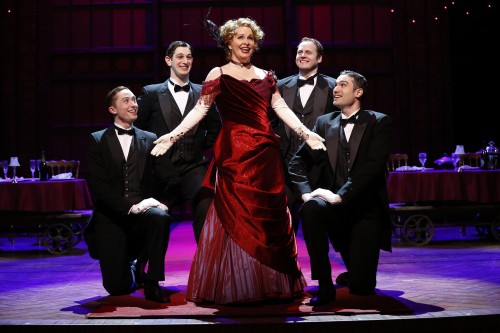 When tourist season comes around and you own arguably the most famous theater in the country, it can’t hurt to play it safe.

That’s what Ford’s Theatre and Signature Theatre seem to think, anyway, as they’ve teamed up to bring Hello, Dolly! to the Ford’s Theatre stage right as the cherry blossoms and spring breakers roll in.

It’s not an entirely bad idea: the line to Tuesday’s performance stretched down the street outside; groups arrived by the busload; and the show – which won the 1964 Tony for Best Musical and/or production of the year at your high school – is a light, catchy romp.

If that’s what you’re looking for, Hello, Dolly! will do just fine; but this production has room to improve for those of us watching from beyond the tour bus.

First, the good: Nancy Opel makes an excellent Dolly Levi – which is wonderful news, since the show depends on her success. She brings emotional intensity, precise comedic timing, and strong vocals to the classic role. Edward Gero plays a spirited Horace Vandergelder – Dolly’s love interest – using some of the arrogant, conflicted charm with which he wowed DC in Red.

The male ensemble may be the most impressive performance of the night. (Is there a Helen Hayes award for best group of tall, dancing men? There should be so these guys can win it.) Played by Harris Milgrim, Alex Puette, Jp Qualters, and Kyle Vaughn, these singer/dancers add invaluable quality to the production. Their collective work in Act 2 is like watching an Olympic marathon.

However, regardless of how well the lead cast carries this production, and regardless of its impressive Tony stockpiling back in 1964, Hello, Dolly! comes with a few problems built in. The story clumsily tramples over major plot holes at times. The characters’ motives aren’t always clear, which leaves their biggest decisions unsatisfying. And much of the conflict in the plot resolves through kismet.

Director Eric Schaeffer and scenic designer Adam Koch have organized the show around a theme of movement, with scenes taking place on and around luggage, especially through Act 1. Indeed the passing of time and other people are an important part of Hello, Dolly!, but with the luggage constantly on stage and a large train station door looming ominously in the back throughout, you start to think the whole story might take place in Grand Central. It feels claustrophobic to follow the characters inside, outside, at a parade, at a restaurant, in Yonkers, in Manhattan, and yet never know for sure exactly where they are.

When the luggage rolls away or is not in use and the cast has a chance to do what they do best, show-stoppers take over. “Before the Parade Passes By” and “Hello, Dolly” – two of the most famous numbers in musical theater – shine, and are worth the price of admission. The brilliant Act II choreography by Karma Camp simply wows. Did I mention that male ensemble?

There are elements to Hello, Dolly! not to be missed, and others the show could do without. Dolly’s bright, belted numbers move a captured audience to tears even while luggage weighs the show down. But isn’t that what any tourist experience is like?