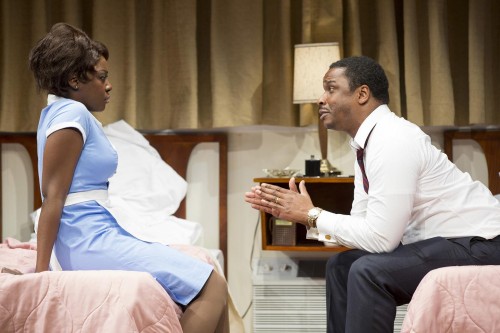 On the 45th anniversary of Martin Luther King, Jr.’s assassination, less than two miles from a new monument erected in honor of the late civil rights leader, Katori Hall’s The Mountaintop opened at Arena Stage. The show is a bold imagining of the last night of Martin Luther King, Jr.’s life that not only takes us inside Room 306 at the Lorraine Motel where he stayed, but into the mind, heart, and soul of the great man.

However in Hall’s vision, we do not see an infallible leader, the perfect picture of leadership and integrity that we like to bestow upon the great leaders of our time. Instead we see MLK as a man with real weaknesses, vulnerabilities, hopes, and fears.

The show picks up on the evening of April 3, 1968 on the eve of King’s assassination. King (Bowman Wright) returns to his motel room after delivering his “I’ve Been to the Mountaintop” address earlier that day. We see King as a tired and weary traveler, anxiously awaiting for a pack of Pall Malls, eager for a drink, struggling to write his next sermon, “Why America May go to Hell.” It is an image that is far from the charismatic leader that we know for delivering the “I Have A Dream” speech.

His restless night is interrupted by Camae (Joaquina Kalukango), a hotel maid. Together the two embark on a night of full of exploration and imagination in what would be the final night of King’s life. It is only a vision of what that night could have been like; the 31-year-old Hall was born long after MLK’s assassination.

The rotating set of the Lorraine Motel (designed by Clint Ramos) looks ripped from photographs, and sets the mood excellently along with fantastic lighting and visual effects that create the ominous tone of night.

The chemistry between Wright and Kalukango is magnetic. King isn’t shy about coming on to Camae, dropping cheesy pick-up lines worthy of the audience’s chuckles. The interaction between the two keeps us enthralled past the fact we are seeing the great Martin Luther King, Jr. flirting with a woman who’s not his wife. Director Robert O’Hara of Bootycandy fame keeps the one-act light, with the many laughable moments throughout, especially with one reference to one of King’s most well-known lieutenants, Jesse Jackson.

After some twists and turns the premise becomes reminiscent of an episode of The Twilight Zone with hints of It’s A Wonderful Life. Like any man facing his own death, we see King pleading at death’s door, worried about the work that’s left to be done, unable to comprehend that life will move on after him. It is a response we can all understand.

However, Hall’s final payoff, while designed to send the audience off inspired, is a punch that lacks enough power to land the final blow. A glaring note, but a minor one within an all-around good production.

It is hard for us to imagine great leaders as people just like us. We assume that their greatness has been bestowed from above, blessed with the perfect set of abilities to change the world. Hall aims to prove that King was just a man like the rest of us, but we too have the ability to create change in this world just like he did.

One thought on “We Love Arts: The Mountaintop”