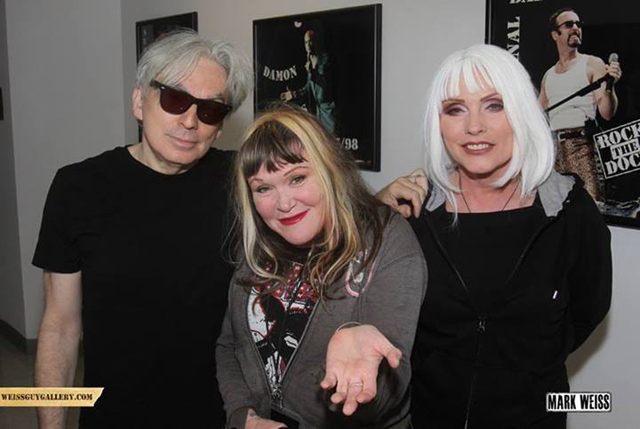 Soon, the band is playing “Union City Blue,” a rare treat from the underappreciated Eat to the Beat. Ms. Harry, it must be said, sounds great. Her words, like honeyed diamonds, are as sweet and strong as ever, even if she presents herself as being a little kooky these days. She and a few of the new band members came out in Harry Potter-inspired wizard’s garb at the beginning of the show, and Harry wore her hat and cloak for several songs before deciding to take them off and babble a bit about how the outfit made her smarter, which was desirable in an academic city like Washington, DC. Guitarist Chris Stein and drummer Clem Burke, the other legacy members of Blondie, remained stoically dressed in all black and all white respectively, happy to be silent punk elder statesmen while Harry played space cadet.

The band plays another new number–the single “A Rose By Any Name”–and the audience is reminded that its nu disco flourishes come from the actual disco in which Blondie was forged. Blondie isn’t afraid to reach comfortably for additional influences from neighboring genres and in this case countries, however, as one of the peppier new songs, “Sugar on the Side,” features Colombian electronica artist Systema Solar, who appeared and sang their parts effectively on prerecorded big screen video at the rear of the stage.

Other concert highlights included a stunning rendition of “Rapture,” where Harry demonstrates she can still carry the airy tune while still bringing home the white-girl rap. In a nod to the band’s recent tributes to the Beastie Boys, they blend a bit of “No Sleep Till Brooklyn” as a medley into the end of “Rapture,” which is a lot of fun.

The show’s encore is chock full of terrific moments, including keyboardist Matt Katz-Bohen, who joined Blondie in 2008, stepping out from behind his synthesizers to thrash away on a keytar during a rambunctiously awesome performance of “Call Me.” The band also delivered a fantastic cover of “Relax” by Frankie Goes to Hollywood–a song also apparently slated to appear on the new album when it materializes in November. (Although I liked the Blondie cover, I rather preferred Duran Duran’s medley of the song with their own “Wild Boys” as toured last year!) And the band closes the set with the timeless “Dreaming,” always a welcome song.

For this “No Principles Tour,” Blondie recruited the perfect tourmates–Los Angeles band X. X were a perfect counterbalance and complement to their New York-based contemporaries in Blondie. Exene Cervenka and John Doe delivered a high-energy punk/rockabilly set of familiar favorites ranging from “Los Angeles” to “Devil Doll.” Doe in particular was a delight to watch as he flung himself into playing his guitar wild and carefree, throwing it behind his head while continuing to strike its strings at one point toward the end of their performance. He was a consummate showman, and a real presence on the stage. My only complaint was that the club was much too packed for dancing!