Every year, hundreds of hikers attempt to traverse the 2,181 miles of the Appalachian Trail that stretches from Georgia to Maine. The typical journey takes at least four months. In 2011, long-distance hiker Jennifer Pharr Davis accomplished it in a little over 46 days. She became the trail’s overall speed record holder and the first woman to do so.

Thursday evening, Davis visits the National Geographic Museum to share her story about this incredible achievement. National Geographic is giving away a pair of tickets to a lucky WeLoveDC reader for the event. (See the end of the article for instructions on how to enter.) Davis sat down with WeLoveDC to talk about her accomplishment and time on the trail.

What inspired you to attempt the fastest hike of the Trail?

I had hiked the trail twice before, once in 2005 as a traditional thru-hike taking 4 months, and again in 2008 where I tried to set a new women’s record. I did that, hiking the trail in 58 days and averaging 38 miles per day. But coming off Springer Mountain, the southern terminus of the Appalachian Trail in Georgia where I finished my hike, I knew instantly that I had a lot left in the tank and that I hadn’t pushed myself to the max. So I immediately starting contemplating the possibility of doing it faster and of possibly trying to break the overall record of 47 days. 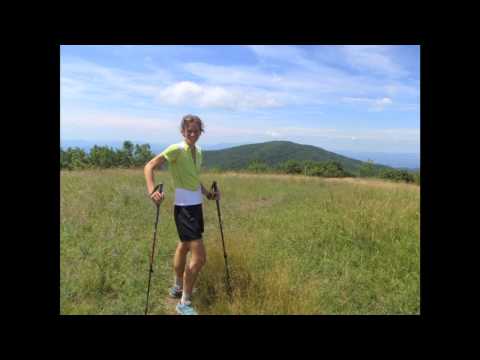 What do you think is the allure of the Appalachian Trail for both serious and casual hikers?

I think the biggest compelling force is our desire to re-enter with nature, to be parts of it and not just observers who are removed from it. Or to become who we were originally made to be as humans. We use the word “primitive,” and it has a negative connotation, but really that’s who we were designed to be. I think people want to break away from the stagnancy, for our routines and from the milieu of life- interstate traffic and fluorescent lights and wireless devices. There’s still something in us that calls us back to our original state, and that’s a beautiful thing.

What was one of the more difficult challenges you faced in the hike?

Probably the most difficult thing was that for the first time in my life, I quit. I was in Vermont, just south of Hanover, New Hampshire, and I’d had excruciating shin splints for 10 days or so, and been mildly hypothermic after getting hit by a sleet storm on Franconia Ridge, and I’d just had enough. I’d never quit anything before in my life, but I was completely ready to throw in the towel at that point. But I came to this road crossing and I told my husband that I was done, and I told him what I was thinking and feeling and he listened sympathetically- he’s always so sympathetic and he hates to see me hurt. But this particular time, he knew me better than I knew myself and he basically said, “Suck it up.” He told me I was really down right then and that if I wanted to quit the next day when I was feeling better, that was fine, but that I needed to keep going at that point. So I did. And I by the time I got to the next road crossing 12 miles later, I felt better mentally as much as physically, and I never thought about quitting again.

What two key suggestions would you make for those looking to hike a significant portion of the Trail?

I would say you have to be really flexible. You have to take what the trail gives you as far as the miles you hike in a day, the weather that you face, and other factors that are out of your control. But I think you also have to be incredibly rigid and stubborn. You have to have determination going into your hike- however long it is- that you’re going to persevere. You know that things are going to be thrown at you that you can’t predict but you’re going to fight through them and not let those adverse circumstances get the best of you.

Share with us some of your great memories from the hike.

Oh, there are so many. I remember hiking in the Cumberland Valley with my friend Dutch, and we came into this field at about 9:30 at night and it was just sparkling with fireflies. I’d had an awesome day of hiking and things were starting to look up as far as my chance at the record was concerned. That was an amazing moment. I think connecting with all of these people in the A.T. community was a wonderful thing. Hiking with Dutch and with our friend Rambler, who had both already thru-hiked that summer, that was just a completely serendipitous thing. They turned out to give me an enormous boost and stayed with us for several weeks. But there were countless friends and family- too many to name, really- during the entire hike who came out and supported me, brought food, and lifted my spirits. That was fantastic.

My best memory was at the parking lot of Springer Mountain, Georgia, where I met my husband before we hiked the last mile together. He’d had ACL surgery so he couldn’t really hike with me but he was the biggest intangible in my success. I mean, there’s no way I could have done it without him, emotionally or logistically. We saw each other when I entered that parking lot and we both just kind of melted. We’d been so wired for a month and a half and we finally let go and allowed our emotions to take over. We just cried and he said, “you did it” and I said, “No, we did it.” That was the most special part of the entire summer. And that was our reward for what we’d accomplished, that memory that we’d have for the rest of our life.

To register for our ticket drawing, submit a comment below using your first name and valid email address before 5 pm on Wednesday, February 19. We’ll notify the winner by Thursday morning.

One thought on “Speeding Through the Appalachians With Jennifer Pharr Davis”