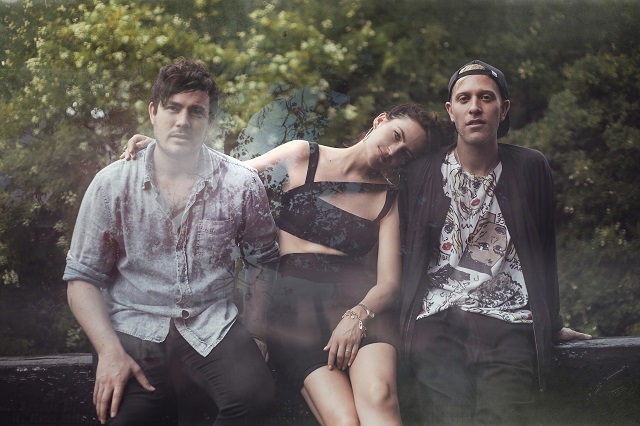 MM: I am new to Blouse, so I listened to a lot of stuff this week. I missed your first album in 2011 but I listened to some of the tracks online like “Time Travel” and “Into Black” and I thought those were great tracks. But then for your second album, you took a different direction and you went with more guitar and less synth. What was the inspiration behind that?

CH: One of the guys in the band, Jacob Portrait, produced both records. Initially, to be honest, he wanted to play more guitar in the band and start touring with us a little more. He was busy in another band for a while. Initially, it was a utilitarian thing maybe—synths are heavy and he would rather play more guitar.

Then it became more serious. “Well, let’s really look at this. What would it be like if we didn’t have synth? What would we sound like?”

With the first record, we started the band in the studio pretty much and made our record. We really hadn’t had time to explore some of the guitar influences we all had. More than anything else, it was a cool challenge for us.

We knew we might bum out some people. I actually didn’t realize how dedicated people were to that first record until we released a different one. It’s hard to please everyone! We haven’t ditched the synth forever.

MM: Sometimes bands have a sophomore slump when they put a second album. And sometimes that’s because they are trying to repeat what they did on the first album, but they cannot capture lightning in a bottle again, and it doesn’t come off. Blouse avoids that by taking a different direction! Was that helpful? Did a different approach keep you energized?

CH: On a selfish note creatively, it kept us fresh. We loved the first record, and it’s a really strange thing to make a second record. You’re in this position where you are competing with yourself. You don’t want to replicate your first record but you want to be true to what you’ve cultivated and not do something different just for the sake of doing something different.

For us it was scary, but a positive experience, and it felt really fresh.

Looking at our career, I think some people may have seen that dramatic shift as a negative thing. Maybe we would gain some more momentum if we kept with a sound that people were familiar with. It’s hard to say! You can’t make business decisions when you’re making a record.

MM: But perhaps it’s good to have new stuff that sounds different when you play it live in concert? You can return to those songs from the first album and play the songs off the second album as well, so perhaps you have a good mix of stuff?

CH: Yeah, totally. That’s a great point. Our set now is so dynamic. We have to craft it. It’s a little delicate because we don’t want the transitions to be too abrupt. I feel like it all really works together. You can watch us play a live set and the songs are different from each other. I get bored sometimes at shows when a band just sounds the same for 45 minutes. It’s been nice for us, and I think nice for the audience as well.

MM: As different as the two albums are, I think they hang together well in part because of your voice. You have a pleasant and distinctive voice!

CH: Thank you! It’s nice to have a fresh take on it.

MM: Since I mention that, and to get some perspective, I read a bit about how you started the band, but did you formally learn to sing?

CH: My family is pretty heavily into music and my dad gave me a guitar when I was 12. I’ve been writing songs and singing for a very long time. It’s always something I’ve done. I’ve always been in bands—the same with the guys in the band. So it definitely wasn’t a new thing. I can almost say I’ve been working on Blouse my whole life. It’s the thing I dreamed about when I was a little kid.

MM: What about Blouse in the future. You’ve put out two albums. What happens next? A third album? Something different?

CH: I have a hard time looking into the future. Another record would make sense. I keep writing and I keep recording. I feel very lucky to be doing this now in any fashion.

I am working on a solo record with my label. It’s due to come out in the fall, so that’s what I’m working on right now on the side, writing a little bit. Deadlines are tricky in music, as with anything creative. You can give yourself a deadline and inevitably don’t make it. But it’s good to try.