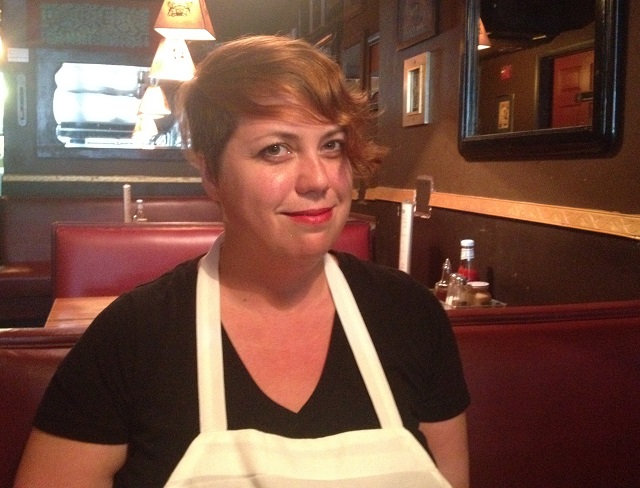 When you hang out with a crowd that goes to see a lot of concerts, as I do, you are occasionally going to find yourself eating in a concert hall.

You might do so in the moment, and you might not expect the food to be too good. So you may find it refreshing when the food at your favorite venue is really consistently great.

Things make sense once you look behind the curtain at DC9, however, and find Amber Bursik in the kitchen. After finishing culinary school, Bursik worked at Georgetown fish house Hook for several years and then popular Mediterranean restaurant Palena for several more before going to work at DC9 a few years ago.

“When I came in here, there was a menu in the place and I had to work within the parameters of the menu in place and the size and capabilities of the kitchen,” Bursik told me. “Because of that, I was told I had to have the burgers on the menu. I could change the burgers, but we had to have burgers.”

In her last five months at the now-shuttered Palena, Bursik was working the grill station, where she was responsible for cooking what many called the best burger in DC.

“It was fun and interesting but at the same time, you are working at this fine dining restaurant and you’re cooking burgers!” Bursik said. “So it was funny to come here and cook burgers again. But we have a great burger because of it.”

At Palena, Bursik learned that a good burger should be well seasoned but simply seasoned as well. At DC9, she became determined to innovate by introducing seasonal burgers to the nightclub menu.

“I was really excited to do something from my childhood that I really love,” Bursik said. “When I was a kid growing up in Charlottesville [Va.], my mom used to make this peach chutney. It was really good, and she always served it on burgers. From there, the idea of the seasonal burger really blossomed.”

So DC9 sees the peach chutney burger in the summertime. Other times, the burger may have a corn relish or a green apple and green tomato chutney. Inspired by her time at Hook, Bursik developed a burger with romesco sauce and grilled spring onions; in January, DC9 offers a kimchi burger with a fried egg on top.

Bursik has added other items to the menu as well, introducing a North Carolina pulled pork sandwich that melts in your mouth, inspired by roadside pork barbecue found during many summers spent at Nags Head. She also cooks up a Southern fried half chicken, brined and marinated in buttermilk and served with hushpuppies and slaw. Indeed, the entire menu largely smacks of Southern cooking, some of which was inspired by Bursik’s grandfather.

“The other thing I love on the menu is the pickled shrimp. That’s something else from my childhood. It comes from my grandfather, who was from New Orleans. That was something we always had at every family gathering or special occasion,” Bursik told me.

Her grandfather also lends his name to The Herbert, a burger topped with fried green tomato, applewood bacon and Tabasco aioli.

Bursik’s upbeat spirit and sense of wonder also have added to a sense of fun and camaraderie at DC9. A conversation with the bar staff turns up some laughs over a time she inflated a bunch of swim rings for a beach-themed party. She proceeded to put ring after ring on the food runner, who continued to run food with all the rings around her waist. Everyone who passed by starting laughing at the sight.

Of course, working in a music venue means you get to have fun at work, at least sometimes! You get to catch some good shows when you get off your shift. Bursik lists off her top shows at the nightclub in recent months, including Sylvan Esso, Royal Blood and Courtney Barnett. (Barnett, an Australian singer-songwriter, is a personal favorite of Bursik, who will play the likes of her and St. Vincent in the kitchen when she’s not listening to BBC Radio 1 or XFM.)

Bands often eat at the club and send their compliments to the “best food on the tour.”

Bursik has been inspired by extended kitchen hours on the weekends to perhaps change up a little bit for the night owls.

“I’ve been toying around with hot dog recipes,” Bursik said. “With the kitchen open until 1am on Fridays and Saturdays, I thought it might be fun to have a late-night hot dog menu. We have these really great hushpuppies, for example, so I might add a corndog.”

DC9 owner Bill Spieler, who’s also married to his chef, says he’s always impressed at the quality of his wife’s kitchen, particularly given how small it is. DC9 has gathered some accolades for its burgers and other fare, but Spieler points out that more of the praises come from music reporters, like say me, than food writers.

“Since DC9 is a nightclub, it’s been hard to convince people that we have really good food,” Spieler commented. “Thankfully, there have been writers in the music scene that have come in to write about bands and have tried our food. It’s so unexpected that such good food is at a music venue that they end up mentioning the food in their articles.”


DC9 Chris DiGiamo
Having good food at a nightclub like DC9 is representative of the DC casual dining scene as a whole, Bursik said. In the past, DC was often mocked for its jumbo slice pizza parlors, but now pizza innovators like Ghibellina are serving late night crowds on 14th Street. The entire Shaw neighborhood has undergone a similar transformation in the 10 years since the establishment of DC9 as more sophisticated and diverse eateries and taverns have taken over long-derelict spaces.

Bursik is a fan of finding high-quality meals in more comfortable places—a trend other chefs have praised as well in chats with me. Her favorite place at the moment comes as no surprise–Rose’s Luxury in Barracks Row. She would work there in a heartbeat if she were looking for a job in another kitchen. The restaurant’s environment is laidback and intimate but the service and the food are awesome, she said.

“The pork and lychee salad is just so good. It’s one of my favorite things that I’ve eaten in recent months,” Bursik said.

To me, ambiance is very important. Places have power, and restaurants and nightclubs are great places where enduring memories can be made. DC9 is such place for me. I’ve loved and lost there, experienced simple joys and complex epiphanies, and found great friends.

And while doing so, I’ve always been able to enjoy an amazing soundtrack and a really great meal.