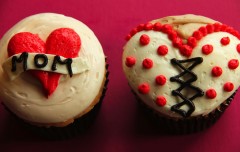 While the DC Rollergirls may not be made of sugar and spice, Buzz Bakery is serving up some sweet cupcakes that are. Both Virginia locations of the bakery are selling two varieties of cupcakes until September 18th to raise awareness and support the DC Rollergirl’s East Region Playoffs, “Nightmare on 95” in Baltimore on September 16-18.

The two cupcakes created by executive pastry chef Tiffany MacIsaac are the “Dorris Dayngerous,” a pink chiffon cake with raspberry jam and lemon buttercream, and the “Whiskey Houston,” a Johnny Walker-brown sugar cake with an Buffalo Trace-apple butter and a Jameson-vanilla buttercream. The two tough cupcakes are $4 each. Get ’em while their hot and support your gals on roller skates.

Correction: Buzz Bakery is offering the cupcakes in support of the DC Rollergirls team, but the proceeds from the cupcakes are not going to the roller derby team. So it’s been quite a lackluster week in food. Ha!

As everyone knows by now (but I will repeat anyway), DC took home two James Beard Foundation Awards this week. You can call them the Academy Awards of food.

END_OF_DOCUMENT_TOKEN_TO_BE_REPLACED There’s a new bakery on the block in Ballston. Buzz Bakery is opening its second location today, and is offering samples of baked goods and MadCap Coffee at the new location.

While some of the offerings will be the same, there are several noteworthy changes and additions at the new location. For starters, there will be new breakfast pop-tarts, waffles, quiches, house-made ice creams and popsicles. Plus, you’ll be able to satisfy your sweet tooth at home with Buzz’s take-and-bake options of frozen cookies, scones, as well as sausage and cheese biscuits, that you can bake at home. Additionally, the bakery has a new and exclusive coffee supplier, MadCap Coffee, a small company based out of Michigan.

END_OF_DOCUMENT_TOKEN_TO_BE_REPLACED I don’t know about you, but Fridays are fast becoming my “I need caffeine STAT” days. So, all the news fit to eat in the District, your-author-is-hopped-up-on-chai-tea edition. We’ve got Chef Ripert, new salad choices at Chop’t, the 9:30 cupcake, and paella! END_OF_DOCUMENT_TOKEN_TO_BE_REPLACED