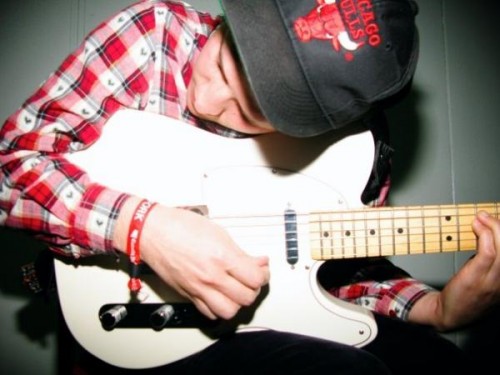 While the early-week, DC-music, blogosphere is atwitter with tales of Courtney Love’s awful on-stage antics at the 9:30 Club on Sunday night, Friday night’s Wavves show seems to be completely off radar. This is interesting to me, because Wavves mastermind, Nathan Williams, is an equally volatile personality known for on-stage meltdowns and fisticuffs of his own. In fact, before the weekend began, the quality of the Friday night Waaves’ concert at Rock & Roll Hotel was as much in question as was which Courtney Love would appear at the 9:30 Club on Sunday. When faced with the decision of which concert to attend (there was no way I was going to sandwich my weekend with potential cluster-f*cks) I used a simple calculus to aid my decision making: Courtney Love is a miserable, over-the-hill, waste of space who only ever put out one good album; while Nathan Williams of Wavves is an unpredictable, indie-genius on the rise, who cranks out infectious tunes as frequently as normal people draw breath. For me the decision was easy; both shows had the potential to be spectacular personality-based failures, but only Wavves had the possible upside of also delivering brilliant music.

Nathan Williams did not have a nervous break-down on-stage, nor did he indulge himself as the star of his own iPhone-shot reality-show on Friday night. He did talk quite a bit between songs, but then so did his rhythm section. Their collective antics were less delusional rants and more about bratty fun. Wavves did more than hold it together on Friday night. They showed up with their snotty, punk attitude and tore through an hour of great, noise-wrapped pop-music. They were preceded by another blog buzz-band in Cloud Nothings from Cleveland, who also put on an excellent set of bedroom-recording inspired tunes. Both bands combined to put on an fantastic new music showcase for the nearly sold-out crowd at Rock & Roll Hotel on Friday.