A few months ago I was given the opportunity to drive into the office, mostly because of a free parking pass that was gifted to me for a “short while”. That time is, unfortunately, up. Starting with Thursday’s commute, I have no free parking anymore.

It’s not that I don’t want to ride Metro. It’s not that I don’t believe that we need good public transportation and fewer cars on the road. It’s just that I’m dreading the idea of becoming a regular Metro rider, again. So what are my options, and what was it like to drive in for almost half the year?
END_OF_DOCUMENT_TOKEN_TO_BE_REPLACED Having said that, from time to time (at least once a week) when I ride Metro, I get the urge to drive again. Every time I look at Metro’s site and see “delayed” (as I write this, the Orange and Blue lines are delayed) I want to get in the car and go.
END_OF_DOCUMENT_TOKEN_TO_BE_REPLACED Just a heads up that two major DC bike events are coming up next month, so get your bike out of storage and sign up now for these two events:

Bike to Work Day – Friday, May 21:  Registration is open for this commuting event that features 35 regional pit stops with free t-shirts, food and drink, and raffles. Worried about biking in traffic? Join a Commuter Convoy so you’ve got company on the ride in.

Bike DC – Sunday, May 23:  Register now for this 19-mile recreational ride through the streets of DC. Pedal down Pennsylvania Avenue or the GW Parkway without having to worry about cars, as the route is closed to traffic during the event. Then wrap up your ride with Finish Line Festivities out in Crystal City. So, I’m at work.  I decided to skip the trains and made it in with little hassle via Metrobus.  But, now I’m starting to worry about the commute home.  Granted, it’s still five hours off, but thinking about the mess that the Metro has been this morning makes me wonder if I should even bother trying to get out of the city.  I might just hunker down with a beer somewhere and wait this whole situation out.  Things should be resolved by 8ish, right?

As you are all aware, the Fed has finally reopened today after nearly a week of closure.  With roads fairly clear and sidewalks mostly shoveled, it seemed like the right call.  But I’m beginning to suspect that maybe it wasn’t.  Metro appears to be woefully unprepared for the return of the Federal workforce.  Trains and buses are running sporadically and we’ve been getting reports of measured chaos at many metro stations.  Personally, I want to know what the deal is.  According to the WMATA website, all lines are on schedule and Metro has “expanded service for Friday.” Problem is, expanded service apparently means one train every fifteen minutes.  In my book, that’s not quite enough for rush hour.  So, what do you all think?  Was it a good call to open the Fed, or did your commute tell you otherwise?

We all love to complain about our commutes– by Metro, by car, and by bus– and we all think that we have it worse than most people.   Well, the folks at Bike Arlington think that biking is usually the most efficient way to get around in the city, and they’re willing to put it to the test. 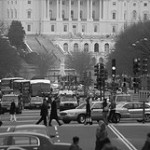 It seems to me that the first two months of 2009 have been a commuting nightmare. The morning traffic report on NPR is always citing a series of major delays on the metrorail, metrobus or the DC Metro area roadways.  In recent days it’s been an Orange/Blue line derailment and traffic ridden lane closures on Route 50, not to mention the havoc caused by Monday’s Snowpocalypse.  Even for those of us on foot, the congestion and hecticness of navigating the DC streets seems to have multiplied in 2009.  Pedestrians and drivers are more irritable, hasty and almost reckless with their decision making.  Yesterday, I saw a jaywalker hastily cross the “Vortex of Doom” (aka the Farragut North junction) without looking both ways and he quite nearly got creamed by a double decker bus.  Could the state of the economy and the accompanying angst be trickling down into the state of our daily commutes?