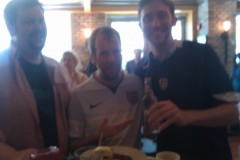 Bros Icing Bros. You’re familiar with it, right? I feel like at this point, the only meme overtaking it involves Vuvezelas.

If you’re familiar with the DC blogging scene, you’re probably familiar with Aaron Morrissey and DCist. Aaron, long time weekend and sports editor for the Gothamist site just was named the site’s new editor, and we couldn’t be happier for him here at We Love DC.

But that doesn’t mean we couldn’t have some fun. At halftime of the US-Slovenia World Cup game (at that point, 2-0, and ever-so-painful to think about), WLDC’s fearless editor, Tom Bridge, presented Aaron Morrissey with a partially warm, Passion Fruit Smirnoff Ice. Aaron, with no ice to block it, was forced to accept.

His acceptance speech? “I’d probably rather drink this Passion Fruit Smirnoff Ice than watch the U.S. soccer game right now.” Well, the good news is that Landon Donovan halved the deficit. The bad news is that the DC blogging Ice war has begun. The theft is interesting considering October reports by My Fox DC and DCist that undercover MPD officers would be donning Northface apparel in an attempt to nab thieves. Wonder if the two are in any way connected. END_OF_DOCUMENT_TOKEN_TO_BE_REPLACED

We here at We Love DC would like to say happy birthday to our interweb neighbors at DCist who turned five today.  That’s like fifty years old in Internet years!  I’d like to personally thank them for their Photo of the Day feature that helped energize my interest in photography, and no doubt countless other photographers.  Between their Unbuckled concerts, their annual DCist Exposed photography show, and their great local news coverage, well, they go above and beyond the call of duty.  Happy Birthday, DCist.  We’ll understand if your Morning Roundup hits sometime around noon tomorrow.