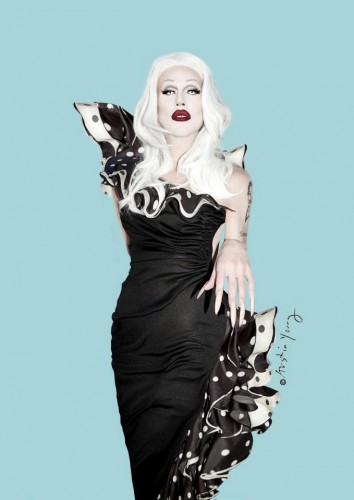 all photos courtesy of Sharon Needles

We Love DC Music Editor Alexia recently got the chance to chat with new drag superstar Sharon Needles, the most recent winner and reigning Queen of the super-campy Logo reality-contest show “RuPaul’s Drag Race.” She will be appearing at Town this Friday, June 8th as part of DC’s Pride celebration. Sharon chatted with Alexia about music, Queens, and growing up goth in a small town.

Sharon: How are you?

Alexia: I’m great! Thank you so much for talking with me!

Sharon: I would like to apologize for my tardiness- I was buying my first big purchase with my prize money- a 1972 Bonneville Hearse!

Alexia: I want to see pictures!

Sharon: Don’t you worry about that! There’ll be more pictures of this on my Facebook than me! It’s my baby- I named her Peggy!

Alexia: That’s awesome. So I love your style, I love that you mix the gorgeous and the grotesque, that you’re on the fringe of the fringe…

Sharon: Thank you! I put the gore in gorgeous, darling!

Alexia: I’m so happy that you won RuPaul’s Drag Race!

Sharon: (laughs) Thank you! Me too!

Alexia: So how did you get started in Drag?

Sharon: You know, I grew up in a small farming community where there weren’t a lot of avenues for artistic, imaginative children like myself. So I basically just studied pop culture through television. You know, people like Elvira and Peggy Bundy, and all the horror movies that I was in love with as a kid were so inspiring to me. I’ve always played with costumes and I’ve always played with feminine fictitious characters. You know some kids played house, I played Night of the Living Dead in my backyard. So yeah, I’ve always been interested in costumes, makeup and hairpieces, and shoes. So at the age of fifteen I would lie to these nightclubs and say I was eighteen, because I looked older than I was, and started performing at a really young age.

Alexia: So you started performing while you were still in your hometown?

Sharon: Yeah, I was in Newton, but I had much older friends, because I didn’t really connect with the kids at my school. I hung out with all the punk and the goth kids, and they would drive me up to Des Moines, which was the closest city, and I started doing drag shows in the smaller nightclubs there. END_OF_DOCUMENT_TOKEN_TO_BE_REPLACED 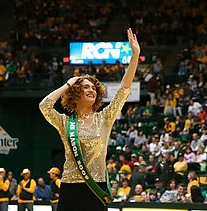 For years, I’ve considered crossing the Potomac as the entry into a whole other country, a bastion of conservatism that confused my liberal mind. Now I think its Virginians that are confused. Or at least the gun toting, God-fearing types who must be thinking they’ve awoke in Maryland this morning. Just look at these two lead stories in the WashPost:

What’s next? They allow popsicle beer?