The 23rd Washington Jewish Film Festival – one of the oldest and largest festivals of its kind – has returned to the district, with events running through January 13.

Curated by the Washington DC Jewish Community Center, the WJFF features 55 films at ten different venues. It includes a U Street short film pub crawl for the first time this year and a major pass discount for patrons 30 years old or younger.

A special focus on French cinema and a number of music-related films stand out in the 2013 lineup, including a retrospective on Lou Reed and a film detailing the founding of the Palestine Philharmonic Orchestra.

There are also, of course, a few films in there inspired by Woody Allen.

The festival’s closing event on January 13 features a screening of Hava Nagila (The Movie) a documentary by Academy-Award nominated director Roberta Grossman which follows the famous song from its origins in Eastern European shtetls to worldwide familiarity.

Tickets can be purchased online or by calling (202) 777-3231. In addition to single tickets, WJFF will be offering full festival passes for the first time this year. Those passes run at $75, but are discounted to $30 for attendees 30 years old and younger. 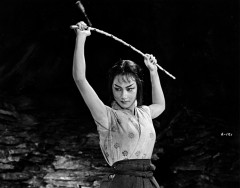 Want something a little different to make this year’s cherry blossom visit truly magnificent? How about a great samurai triple feature?  The National Geographic Museum will be presenting three classics of Japanese cinema, all featuring the iconic Toshiro Mifune and presented in stunning 35mm! Presented in conjunction with the National Geographic Museum exhibition Samurai: The Warrior Transformed, the films will be introduced by Michael Jeck, veteran film programmer notable for commentary on Criterion DVD releases of Seven Samurai and Throne of Blood.

Admission to each film is $5, though you can see them for free with paid admission to the new samurai exhibit. (The offer is valid only for exhibit tickets purchased for Saturday, 3/31; there are a limited number of tickets available.) Warning—these films all have some pretty violent content. Film details after the jump. END_OF_DOCUMENT_TOKEN_TO_BE_REPLACED If you’d like to win a pair of festival passes, simply drop a comment below (using an email address we can use to contact you). We’ll randomly select a winner at noon tomorrow (Wednesday 9/14). END_OF_DOCUMENT_TOKEN_TO_BE_REPLACED When it’s hot outside, all I want to do is go to the movies.  Something about sitting in an incredibly dark and cold room with a diet coke (or perhaps one of those yummy cherry frosty things) in my hand just makes it all better.  For about 2 hours at least.

So, when I heard about DC’s first Buddhist film festival this weekend I thought, now this is really something, 4 days out of the heat – I am so in.

BuddhaFest is a four-day event being held June 17-20 at American University’s Katzen Art Center.  BuddhaFest presents 12 films, including a world premiere, talks by leading American Buddhist teachers, meditations, and a Picnic for Peace.

Now all you need is that delicious cherry frosty… If you like riding bikes and watching films, have I got the activity for you this weekend!  The Bicycle Film Festival is visiting 37 cities this year, and this weekend is DC’s turn!  Tonight is the kick-off party at Asylum and film screenings are tomorrow at the Navy Memorial Theater at 5, 7, and 9 PM.  There’s something for everyone– topics range from cyclocross to the world’s longest bike race and bike polo.  Tickets to screenings are $8 and are available online.

As for how to get there?  Um, hello.  Ride your bike.  WABA will be providing free valet bike parking!