Today at the National Bike Summit going on at the Reagan Building, Google Maps announced it is now giving directions by bike.

Time estimates for routes are based on an algorithm that takes into account variables such as the length of the route, the number of hills, and fatigue over time…maybe doughnuts eaten over the winter, too?

You can find it at http://maps.google.com/biking, or from the “get directions” drop-down menu. 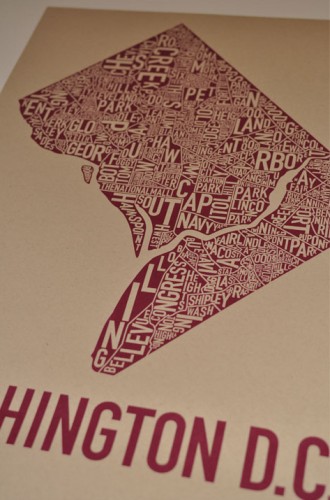 As an urban planner, I really love living in a planned city, and I love maps of DC too– so much that I recently looked around and realized that the majority of wall-hangings in my home are DC maps. So for those of you looking for a holiday gift for someone who loves DC, let me suggest a couple decorative maps that are currently hanging in my home that could make great gifts for the DC-lover in your life:

DC Ork Poster
This was an early Christmas present this year, and already it is one of my favorite DC things. It shows the District’s neighborhoods by their names, creating a very cool effect. While this is extremely useful for determining which neighborhoods I haven’t yet covered in my Where We Live series, it’s also just really cool looking.