There are pirates in Washington.

If you doubt, head over to the National Geographic Museum between now and September 2; the Jolly Roger flag hanging from the flagpole should convince you. If you need more persuasive evidence, head inside and wander through the museum’s latest exhibit Real Pirates.

From fore to aft, this exhibit rolls up the past, present, and future of the pirate vessel Whydah. Originally designed and used as a slave ship along the American-African slave routes, the Whydah was captured by pirate captain Sam Bellamy and used in his fleet to pillage more than fifty prizes across the Carribean. On a course for a New England harbor, the Whydah, her captain, and her crew ran into a violent nor’easter near Cape Cod and sank beneath the waves. With it went a hold full of pirate treasure and most of the men on board.

National Geographic chose to feature the Whydah exhibit for a number of reasons. According to Richard McWalters, Director of Museum Operations, the story of the Whydah crosses three seafaring trades: slavery, piracy, and recovery. Through the shipwreck’s history, visitors are exposed to the realities of the slave trade and its vessels, the life of a pirate crew during the eighteenth century, and the technology, dedication, and innovation of today’s salvage explorers. END_OF_DOCUMENT_TOKEN_TO_BE_REPLACED Welcome to the sweet spot of the baseball season in Washington, when the weather is perfect, the team is playing good cohesive ball, and there are enough deals and giveaways to make a night at the ballpark sound absolutely redeeming. The Nats come home this Friday night for a short but sweet five-game homestand.  There’s a lot to look forward to, for the dyed-in-the-wool fanatic, and the casual fan. Read on.

END_OF_DOCUMENT_TOKEN_TO_BE_REPLACED

The weather on Thursday night was about as perfect as you can find in June in Washington, a great night at the ballpark. The Nats were looking to complete the sweep against the Pirates, hoping for their first of the season. Zach Duke stood in their way, 2009 All-Star, and starting pitcher for the Pirates. No, he’s not Stephen Strasburg, but ¡Livan! Hernandez is the Nats’ current #1, and he was on to devour some innings tonight to finish the homestand. END_OF_DOCUMENT_TOKEN_TO_BE_REPLACED 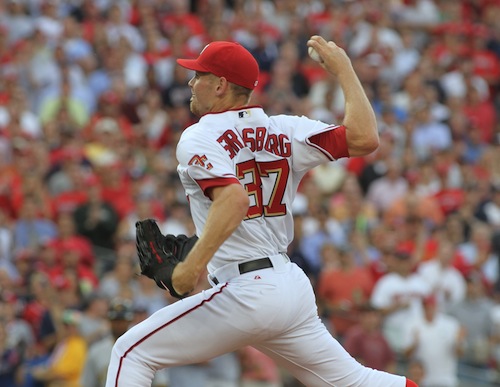 For many other debuts, I’d say he’s right. For Stephen Strasburg’s debut, though, the reality of the present is absolutely matching its expectations. The Nationals tonight delivered Christmas afternoon before the capacity crowd, which at times was so loud as to be deafening, and whose enthusiasm I have seen just once at Nationals Park. That game? The first victory at Nationals Park in April of 2008. END_OF_DOCUMENT_TOKEN_TO_BE_REPLACED

‘She loves him.’
courtesy of ‘misskelly’

If you can’t wait until Fall for International Talk Like A Pirate Day (Sept. 19) and Halloween to get your fix of shiver-me-timbers goodness, then get your lil’ pirate’s booty to H St. tonight!

And — if you’re decked out to your pirate finest — you’ll even be in the running for a $30 gift certificate for best costume.

You can RSVP to argonautdc@gmail.com. Party goes from 7 to 10.