If you live in the DC Metro Area, or if you have been a pedestrian any time of your life, then you probably have crossed the street when you weren’t supposed to. Maybe you were impatient for the lights to change and there weren’t any cars in the street. Perhaps you enjoy living a real-life game of frogger on your way to Starbucks. We all know it’s technically illegal but who’s going to get a ticket for jaywalking?

Well if you work or live in Rosslyn you might end up with a ticket if you don’t follow the pedestrian rules of the road this morning.

END_OF_DOCUMENT_TOKEN_TO_BE_REPLACED My pet project involves making sure photographers in the DC area are free to shoot without idiotic restrictions imposed by a sometimes-security-crazed bureaucracy. So it’s with some interest and outrage that I came across this blog post  by local photographer Jerome Vorus detailing an incident last Saturday in Georgetown. Vorus claims several MPD officers told him photographing people in public without their consent is illegal, said he was being detained, required his ID, and ran his name through a database before letting him go. Um, what? END_OF_DOCUMENT_TOKEN_TO_BE_REPLACED

You know the economy’s bad when you’ve got local officials selling off their “office supplies” to make an extra buck.

“The person that the former chief sold the gun to eventually notified the mayor of the town of the sale,” Attorney Glenn Ivey said.

Maryland State Police are still investigating the case, but as of now Eichelberger is facing a five year prison sentence. 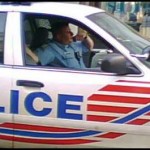 Picture is a bit fuzz and of poor quality, but I caught a DC cop driving through Georgetown, while chatting away on his cell phone sans hands-free device.

Now while I’ll admit to being occasionally guilty of talking on my cell while driving, shouldn’t our cops be exemplars of the code of law?  Granted they’re only human, but come on!  The least they can obey common laws while on duty, in uniform and driving a police car!

In DC, I’ve seen specific police traps that target motorists on cell phones.  In fact, there’s often one not far from where this picture was taken. Surely, this cop has never been a part of those traps or ticketed anyone for cellphone violation that he himself is guilt of.  I mean that would just reek of hypocrisy.

A question that occurs to me is: Could another DC Cop ticket this guy for the violation?  Of course that would be a blatant violation of the Brotherhood of the Cop, but feasibly is that possible? Can an on duty officer receive a ticket? This was the scene at Foggy Bottom Metro this afternoon as Metro Transit Police personnel pulled a guy from an Orange Line Vienna/Fairfax train and detained him, for what offense I do not know:

The suspect appeared to be asleep when I first saw him, but awoke with some poking from an officer, and left the train peacefully. It was when they started to put handcuffs on him that he began struggling, so he was forced to the ground, where the apprehension — and struggling — continued. Then my train arrived and I had to stop shooting video with my cellphone. 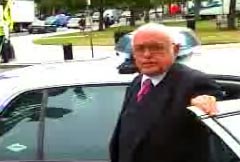 Some drama over at the Hart Senate Office Building when a suicidal middle-aged Chinese man threatened to jump from the seventh floor of the building atrium. END_OF_DOCUMENT_TOKEN_TO_BE_REPLACED

That’s the gist of what Judge Richard Leon is saying in response to the request from the Partnership for Civil Justice, who want the program that debuted DC’s Trinidad neighborhood from ever being used again. Specifically, he raised the concern that since there’s no current implementation of the “Neighborhood Safety Zones” plan, where exactly would he enjoin the MPD from operating?

Looks like we get to see this one played out only after the MPD tries to put the cordon up around another of DC’s neighborhoods. If you speed on K Street NW this month, you’re going to meet DC’s finest around 23rd Street as you come from under the Washington Circle tunnel. There, on the right-hand sidewalk will be Mr. Police Man with his laser speed gun, clocking your lead foot and tagging your license with points and fines.

I watched two officers tag-team K Street one afternoon, writing speeding tickets on every batch of cars zipping up the hill, and unlike others, even welcomed my photography. Their goal is speed limit enforcement and they were happy to have ticket-writing publicity.

No word on the wants of the cabbie pulled over for speeding, but I’m sure we all know what he was thinking…