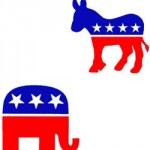 With political races gearing up for the November mid-term elections, why not have today’s Find Of The Day make a nod to the Dems and Repubs. These two 9.5″ tall Royal Haegar planters are in excellent shape, and according to flabbyrabbit, have no chips. Neither the donkey nor the elephant are rocking the  red, white and blue, but are both a matching shade of cream with greenish brown accents. Don’t know how the party leaders feel about that, but I have a feeling the word “unpatriotic” would come to mind.

Arlington is a very progressive and heavily democratic county where Democratic Party candidates have nothing to worry about going into a general election. While that is most likely still the case for the VA House of Delegates race in the 47th district (which includes parts of Court House, Clarendon, Ballston), the republican in the race might just be catching on to some of the progressive values that dems typically use to get elected. While the GLBT community is not huge in Arlington, the majority of local voters are supporters of gay and lesbian equal rights and often use that as a bit of a wedge issue to show why they cannot vote for republicans. Eric Brescia is about to change all of that, at least for his race, according to the Arlington Sun Gazette.