In response to recent threats to the system, WMATA has decided that the negative press that the TSA is getting is the sort of thing that they would like to have also, and today announced enhanced searching of individuals, including bag searches at random stations.  One small problem with Metro’s plan is that they will not be searching at every station, and I can’t quite figure out what would stop someone from seeing police presence at, say, Farragut West, and instead walking just two blocks to Farragut North.  Terrorists aren’t going to be deterred by searches, and a bomb going off at any station would do the sort of damage that would be irreparable to ridership and public confidence in the embattled transit agency.

So, if you were looking for yet another reason to decide that Metro is an agency adrift, without leadership or positive policy, then you just got it.  Searches start in the next few days.  The searches are supposed to take “minutes,” but when you consider it took them 90 minutes to figure out that a christmas ornament with LEDs was harmless, I’ve got to think that the average search of my bag will last approximately six days.

UPDATE: Metro has released a YouTube video to sell this to you, showing that the process should take no more than 60 seconds. You know, as long as no one else is in the process of being scanned, and never mind that 60 seconds is more than enough time to miss your train. 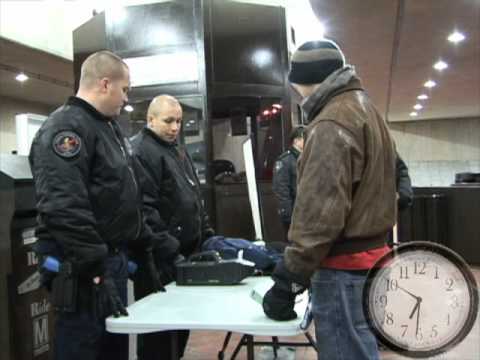 In response, Justices Ginsburg and Breye penned an unofficial official dissent, highlighting the history of the design of the Court, as well as the significance of the front door: END_OF_DOCUMENT_TOKEN_TO_BE_REPLACED Due to the attack on the Moscow subway system earlier today, Metro opened today with heightened security. So if you saw dogs, more Metro police, etc., that would be why. Acting Metro Transit Police Chief Jeri Lee says that the heightened security will last at least through the Nuclear Security Summit scheduled for April 12-13.

Unrelated to the Moscow attack, there will also be a Metro emergency response drill at RFK stadium today simulating a bus explosion. So don’t freak out if you’re over there.

When I first heard about elite security lanes at Dulles Airport, I loved the idea, thinking that I could avail myself of them, or they would at least help speed up the IAD security theatre.

But now that I’ve confronted this vision in reality, I am not so loving. There is something odd about “premium passengers” vs. “security checkpoint” Doesn’t that segregation sound a little discriminatory? As if those who get the special status of “premium” need not pass through security? That their assumed wealth or status excludes them from suspicion?

Yes, I agree that the odds of a frequent flyer being a plane bomber is very low. None of the September 11th hijackers were “Premier Executives” but they were in Business Class before going all Atta on New York and Washington DC.

And while even “premium passengers” have to go through the same no-sandal line, I’m still feeling that this Dulles demarcation ain’t right.