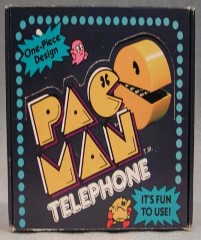 Reportedly inspired by a pizza with one slice removed, Pac-Man was developed by Tōru Iwatani, a programmer for the Japanese company Namco. His primary motivation was to develop a nonviolent game that would appeal to male and female players alike. Unlike previous hit video games like Pong and Space Invaders, Pac-Man had a recognizable main character that allowed it to be the first video game to also be a licensing success. Pac-Man is considered today to be one of the video game classics and an icon of the 1980s.

Recognized by 94% of American consumers, Pac-Man has the highest brand awareness of any video game character ever. The character itself appears in more than 30 officially licensed game spin-offs and countless unauthorized ones. During the early 1980s, Pac-Man was everywhere. It was the first video game to spawn a marketing phenomenon, including licensed books, clocks, radios, gumball banks, a Saturday-morning cartoon and gadgets like this Pac-Man telephone.

This item is one of 137 million artifacts, works of art and specimens in the Smithsonian’s collection. It is not currently on display. 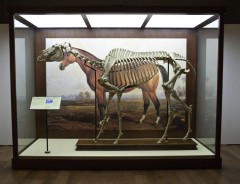 Lexington Racehorse, 1878; Photo courtesy of the International Museum of the Horse

This week’s Smithsonian Snapshot looks at the skeleton of Lexington, the “Official Horse of Bluegrass Country.” Known as one of the greatest racehorses of his day and sire to more winning horses than any other American thoroughbred before or since, Lexington (1850-1875) is a symbol of the town of Lexington, KY.

Originally exhibited in the Osteology Hall at the National Museum of Natural History, Lexington was moved to the National Museum of American History in 1999 to be included in the exhibition “On Time.” His skeleton provided context to the story of the first mass-produced stopwatch that split time into fractions of seconds, allegedly developed to time Lexington’s feats on the racetrack.

In 2010 a team of conservators and specialists at NMNH prepared to return Lexington’s skeleton to his birthplace. They cleaned the bones, made minor repairs, and prepared the skeleton for travel to the International Museum of the Horse, where the skeleton had been approved for loan just in time for the World Equestrian Games in Kentucky—the first time these games had ever been held outside Europe. 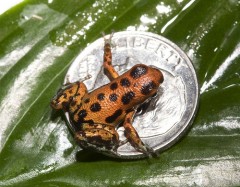 Vibrant but toxic, poison arrow frogs range from less than 1 inch to 2.5 inches in body length. Poison arrow frogs live in the rainforests of Central and South America and on a few Hawaiian Islands.

It is said that poison arrow frogs, also called poison dart frogs, received their name because some Amerindian tribes used their skin secretions to poison their darts. Arrow frogs are not poisonous in captivity. Scientists believe that these frogs gain their poison from specific insects they eat in the wild.

Strawberry dart frogs are one of more than 100 species of poison dart frog. The strawberry dart frog’s reproductive process starts in thick foliage close to the ground, where the female lays about six eggs—each no bigger than a pea—in a moist place after mating. For about the next 10 days, the frogs protect and water the clutch by urinating on it. END_OF_DOCUMENT_TOKEN_TO_BE_REPLACED