Most Crowded Metro Line: I can’t tell you how many times I’ve overheard Orange line riders complain that they’re stuck riding the busiest line.  Most of these Metro riders are on the train between Ballston and L’Enfant Plaza, which definitely is the busiest section of the Orange line, with people packed into Metro trains that are sometimes too full to even board.  But does the Orange line really have it the worst? 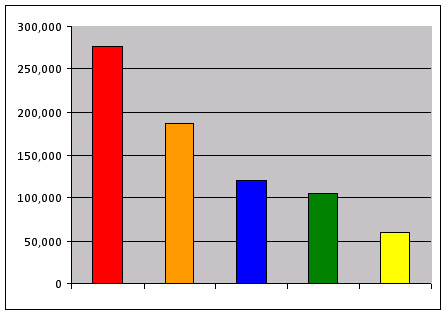 Nope, that’s an honor that goes to Red line riders.  The Red line actually carries 48% more riders than the Orange line every day.  And you Blue, Green, and Yellow line riders?  Don’t even start complaining.  Even if you think that you can’t get any more crammed into Metro rail cars than you are, the Red line has it twice as bad as you.

Most Crowded Metro Station: I know that I’ve been completely overwhelmed by the number of people in certain stations at certain times: Saturday afternoons at Smithsonian, weekday evenings at Farragut West, morning rush hour at L’Enfant Plaza, or weekends at 2:30 AM at Woodley Park-Adams Morgan.  But what’s the busiest station of all? 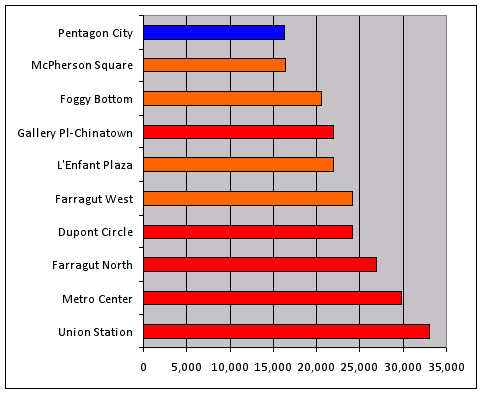 Well, to answer this you need to remember that Metro is primarily a commuter system, and that it attracts commuters from all over the region.  For that reason, Union Station is by far the busiest station in the system.  Think about it: commuter rail transfers, Amtrak transfers, and a bunch of major offices within walking distance to the station. After that, the rest of the top ten stations are all in high-density, office-heavy areas. Not until the 14th busiest station, Shady Grove, or 16th busiest station, Vienna, do you get more residential stations, and Smithsonian is number 18.  So unless you’re trying to shove your way through the shoulder-to-shoulder crowds at Union Station or Metro Center during rush hour, you’re not getting any sympathy from me.

Most Crowded Bus Line: Even though the Metrorail system gets the majority of the focus in the region, there’s a strong Metrobus system out there too.  Metrobus carries over 460,000 people per weekday, compared to Metrorail’s 747,000.  So Metrobus lines can get pretty busy too.  Some of the ones I ride regularly, like the 42 on Connecticut Avenue or the 52/53/54 on 14th Street, have sometimes been so packed with people that I can’t even get on the bus.  But what are the busiest lines? 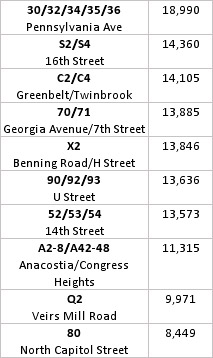 The Pennsylvania Avenue 30’s buses are, by far.  They connect Capitol Hill with downtown and continue to Georgetown and up Wisconsin Avenue.  There are a couple surprises in the top ten: two Maryland-based bus routes, the C2/C4 and Q2, don’t even venture into the District, they just feed into Metro stations.  Luckily, the top ten routes generally have more frequent buses running, so if you can’t get onto that first one that is already standing room only, there’s bound to be one with room coming by shortly (well, we’d hope).

The Circulator isn’t run by WMATA– it’s a DDOT deal– so ridership statistics aren’t compiled in the same way.  But their monthly ridership figures, which are not broken down by line, do show that ridership has grown considerably.  Anecdotally, we know that the Union Station-Georgetown route is typically standing room only and packed to the brim just about any weekday between 6 PM and 8 PM, so that’s gotta be up there.

Crappiest Commute Ever: So if you ride the Red line to Union Station, then walk a few blocks south to catch a 30-series bus over to Georgetown, you’ve officially got the most crowded commute of just about anyone.  Feel free to complain about how you were on the most packed train ever on the red line, then stuck in a mass of wall-to-wall people at Union Station, then couldn’t get on several completely-packed 36 buses.  And if that is actually your commute, you’ve got my sympathy.