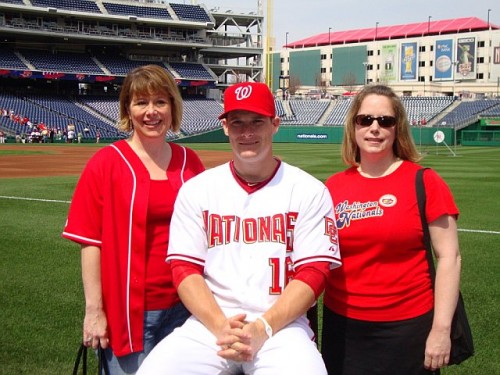 No amount of teasing is ever going to change Cheryl Hauser’s mind. She is and always will be a Nats fan.

Hauser, who was born in DC but lived in Waldorf, Md. until she was 7, grew up in Annandale, Va. with a family who loved to go to Orioles games. Each summer Hauser and her family and friends would take trips to Baltimore to watch baseball. It was their family’s bonding activity.

“We’d support [the Orioles] and we’d go a couple times a year,” Hauser said. “It was a fun family thing, but never as intense as what happened now, which happened by accident.” 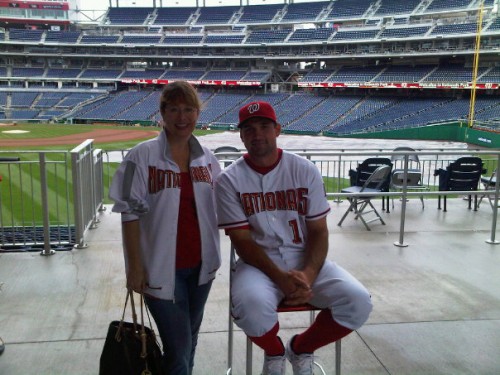 Hauser ended up going to college at George Mason and still lives in Northern Virgina. Her proximity to Baltimore enabled a lifelong fandom of Major League Baseball thanks to the manageable travel time. There did, however, come a time when Hauser and her friend from college decided to stop going to Orioles games. In 1996, Hauser ended her visits to Camden Yards due to a disdain for constant trades. She didn’t like how the management was running the team.

Then the Nationals moved to Washington in 2005.

“When the new team came I was like ‘Ya know let’s just go to 20 games. It’ll be fun, it’ll get us out, it’ll get us away from work. Whatever.’ So we did it for fun and it just became an obsession.”

Hauser is a self-described marketing person’s dream due to the sheer amount of paraphernalia she’s procured since 2005. That combined with her love for the team is pretty much akin to a teenage girl’s obsession for the latest David Cassidy, Joey McIntyre, Justin Timberlake, or Jonas Brother minus the shrill shrieks and crying plus peanuts, beer, and jerseys.

When asked how she feels about the Nationals she often summarizes her point with one simple sentiment: “I just love them.” All feelings of endearment aside though, there is one particular player who holds a special place in Hauser’s heart – Cristian Guzman.

Hauser admits to having a little tear in her eye when the Nationals’ longest standing original member of the 2005 Opening Day squad was traded to the Texas Rangers at the end of July.  She will, however, always remember the time they met fondly.

It was at NatsFest. Hauser was frantic because time was running out and not knowing the placement of players providing signatures before arriving at NatsFest didn’t help.

“They were closing down at the time and I was in line but the people weren’t going fast enough,” she said. Her dream almost ended because of slow fans in line, but the cut-off ended just three people behind her. She would meet her favorite player.

“I knew they were rushing the players out, so by this point I’m freakin’ hyper from trying to hunt him down, trying to find him, trying to … you know … make sure I was in line in time […] He’s like ‘Hi’ and I’m like ‘You’re my favorite player and I’ve loved you ever since the beginning and I think you’re awesome and you’re a great batter and you just keep that up.’ I got all my sentences in [with] the three seconds they allotted me.”

Don’t think she’s retired the recently purchased Christmas gift of a Guzman jersey just yet though. She wore it to the Phillies – Nats series July 31, the day after the Guzman trade, for Nyjer Morgan bobblehead night.

Was she taunted by the out of towners? Yup. Did she care? Not at all.

“I have favorite things,” Hauser said. “I have baseball, wine and shoes. I’d go baseball, shoes and then wine. Those are my loves.”

Between listening to games on her XM radio after work, watching games live at Nationals Park or on television, reaping the benefits of season ticket holder events, buying a ticket to every single game of a seven-game homestand in June to ensure catching Stephen Strasburg’s debut or following her team during the off-season, Hauser feels her obsessive fandom is a product of caring about the genuine individuals who take the field for Washington 161 times a year.

“I think that maybe is a huge reason why I’ve gotten more and more obsessed,” she said. “You look at the kind of quality of people we have on our team and I just like them. They’re just genuine people that really want to play baseball and I really think they want to win for the 12 fans that are there.”

Of course, there aren’t only 12 fans at Nationals Park on game day, but Hauser’s joke statistic is something she takes to heart. “There may not be a million of us but the people that are [there] are hardcore.”

The 20-game ticket package is what she blames for getting swept up in the Nats fandom. “Since we did the 20 game plan I just started to know more about the players. You started to be a little more invested in the team instead of just going to see if we’d win that time. So I started to learn a little more stats,” she said.

“Also, because I went to way more games I was more educated on the technical part of the game. It’s more interesting when you’re actually watching how they shift for certain players.”

The season ticket package is a treasured investment in Hauser’s personal baseball education. It continues to provide her with a further appreciation of the game she grew to love as a kid. Loyalty is a big part of that.

“The thing is that to me I’m all loyalty. You know. I‘m not gonna quit when they’re not winning and I love the underdog thing,” she said. “It’s a long season and each year there’s highs and there’s lows and they’ll always bring you back up.”

Hauser and her father have daily Nationals talks over the phone. He says that in three years the Nats will be a contending team and Hauser agrees. She thinks that’s a realistic goal.

She never expected that the Nats would be an 80-game winning club in their first few years. That’s why she wasn’t disappointed if they lost when she started her fandom. “They were forming a team. We didn’t have a owner. We had no money. I went for the team. I didn’t go for the win,” she said.

“I’ve been teased because they [people in general] were like ‘Why are you a fan of a losing team?’ and I said, ‘You know when everyone’s a fan I’m gonna wear my Chad Cordero jersey 2005 and I’m going to be able to tell stories from 2005 on and say ‘I am a true fan. I’ve been here since the beginning’ and that’s why I’ll never give up on them. I love them.”

5 thoughts on “Nats Fans Are People Too: Cheryl Hauser”