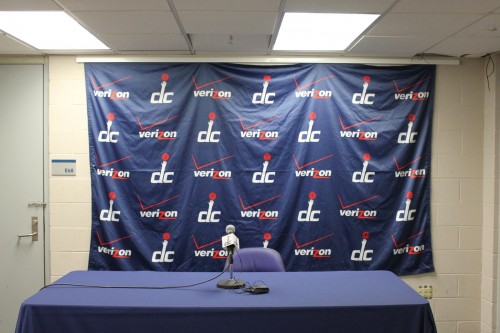 It is going to be a Happy Holidays for the Washington Wizards.

Not only does December 25th mark the return of NBA across the country- the Wizards will open up 2012 with a New Years Day game against the Boston Celtics in the Verizon Center- a game that maybe closer than you think considering the Wizards’ last two victories at home against the Cs.

Basketball is back, and NBA fans across the country are enjoying all the drama, deals, and decisions that are flying about.

Now for those that don’t normally pay attention to basketball, those whose only NBA knowledge is the rash of superstar divorces (watch out Lamar & Khloe – you’re next), it’s time to catch you up.

I thought it would be fitting to preview the upcoming lockout-shortened season by answering a few questions to get everyone up to speed on DC’s Basketball Team and why you should be paying attention to them this season.

What the hell happened with the NBA lockout?

I’ll be honest, at Thanksgiving I thought I would have a year off from covering the Wizards. I could load up on turkey spend the winter and spring watching more shows over at Woolly Mammoth. The NBA Players Association and the NBA owners were entrenched in a labor dispute with no end in sight. David Stern declared that there would be a “nuclear winter” if both sides could not agree on a new collective bargaining agreement. All signs pointed to no basketball this year.

But on Black Friday weekend both sides miraculously agreed on a tentative deal that overshadowed the cheap TVs Best Buy was offering at 4 AM. The deal would bring basketball back for a shortened 66-game season starting on Christmas Day. A Merry Christmas indeed.

How does the new deal affect the Wizards?

If you want the complete details about the new deal I suggest you read Michael Lee’s take over at the Washington Post. Here’s what you really need to know:

The owners and players are going dutch: 50/50 split of Basketball Related Income

Before the lockout, the players received 57% of BRI but  that number will go down to a 50/50 split. The exact number will be somewhere between 49-51 percent based on projected revenues. This year the players will receive 51.2% of BRI.

There will be a salary cap… and a salary floor

Once again there will be a salary cap on player payroll for teams. The cap is not an absolute and teams will be able to go above it- but will face stiffer “luxury tax” penalties for doing so. The salary cap for this season will be the same as last year at $58 million.

There will also be a minimum salary “floor” in place as well. Teams must spend at least 85% of the salary cap in the first two years of the new CBA and spend 90% after that. This is important to know later when we talk about Rashard Lewis.

Players that finish their rookie contracts and demonstrate superior performance can qualify for more valuable contract extensions with their current team. Players that make the all-NBA team two times, is an all-star starter twice or wins an MVP award can earn up to 30% of the salary cap in an extension. This is a way to reward young all-stars and hopefully encourage them to remain on the team that drafted them. For John Wall this means he will be rewarded if he reaches all-star levels.

Teams will be allowed to “amnesty” one contract off their payroll

During the new CBA, teams will be allowed to release one player and take his contact off the salary cap payroll. However the team will still be responsible for paying the player’s salary. This clause is a chance for teams to take expensive contracts off the books so they can use the extra salary room to sign other players.

Rashard Lewis is one of the most overpaid players in the NBA. He is due about $17.7 million this year. Most fans expected the Wizards to use this amnesty on Lewis and spend that $17.7 million on a better player.

So why didn’t that happened? Well the free agent market didn’t look that great. Plus don’t forget about that salary floor I mentioned earlier- teams still need to spend a minimum amount of money on their players.

Instead of paying $17.7 million for Lewis NOT to play with the Wizards and possibly overpaying another player (remember that’s how we got stuck with Gilbert Arenas)- the team decided they would be better off having him on the team this year and saving the amnesty for the future, when the free agent market improves. Expect the team to use the amnesty clause on Lewis next year.

Who’s still on the team?

The Rookies: Jan Vesely, Shelvin Mack, Chris Singleton – read my post-draft article for my thoughts on the three.

Restricted free agent Nick Young is still in LA looking for a deal. As a restricted free agent, Washington can match any deal offered to him and bring him back to DC for another season. Young played a major role in the offense last season and scoring was sorely missed in Friday’s pre-season shellacking to the Phildelphia 76ers. I suspect Young will return to the team but at what cost? According to the Washington Post, Young is looking for $9 million a year and I don’t think he’s worth that much.

What have the players been up to?

Some players like John Wall, kept busy during the Lockout playing in various summer/fall leagues. Others goofed off and made YouTube videos with their spare time. I think it will be important for players like John Wall and Roger Mason to lead a young team and keep knuckle heads like McGee and Young (if he returns) in line.

The Wizards will play a shortened schedule that will include an even split between home and away games.

Training camps and free agency opened up back on the 9th with the pre-season starting this past Friday. This means teams will have very little time to get ready for the new season. The Wizards will only play one more pre-season game, another match against Philadelphia on the 20th. Six days after that the team will start the season against the New Jersey Nets.

From a media standpoint the Wizards won’t have much exposure on a National level, with only a handful of games picked up by NBA TV. While some hoped for more attention for John Wall, I actually think staying out of the spotlight will be helpful for the young team.

What’s the outlook for the Wizards this year?

A short training camp and pre-season means that the first few weeks of the NBA will be sloppy for everyone. John Wall will be the center of attention as we look to see if he can build upon a fantastic rookie season and reach elite/superstar status.

For talented but un-established players like JaVale McGee and Jordan Crawford- we need them to mature and become professional basketball players- not just young ballers with potential.

We have three rookies that make up a Wizards draft class that has been highly praised- they need to show that they can become role players and eventual starters that can support John Wall.

Rashard Lewis, Andray Blatche need to become better leaders and join Roger Mason as a veteran presence that can help steer the ship.

Vegas puts the over/under wins for the Wizards at 19.5- which would put the Wizards around .280 for the season like last year’s 23-59 performance. It’s a very fair number, which the Wizards could meet and even go a little over if Blatche plays like he’s paid, Young returns and provides a spark, and the rookies come out of the gate running.