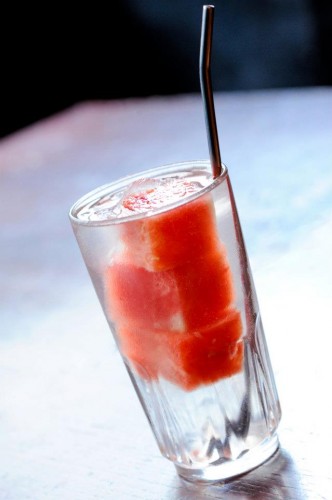 All of that is a really long winded way to say that if the Dance tastes kind of like a Margarita to you, well, that’s because it takes off from the Margarita formula. Served in a tall glass, the Dance takes its inspiration from Rob Fisher’s sculpture titled They Shoot Horses, Don’t They?. 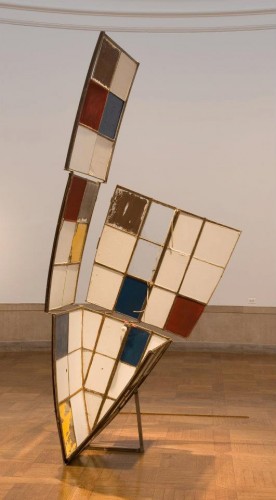 The geometric color pattern in the art is mimicked by the addition of coconut and watermelon ice cubes (carefully stacked in the glass before the drink is built); the Margarita formula is expanded upon with Hellfire Habanero Shrub and Orange Cream Citrate from Bittermens, then topped with soda water for fizz. The drink changes as the coconut and watermelon ices melt, adding additional subtle flavor cues and encouraging you to take your time finishing it. I found myself longing for a salt rim, more out of a Pavlovian response to tequila, lime, and Cointreau than anything else, but this was a fine cocktail that succeeded both as a work inspired by art and as something I could see going on a bar menu.

“Wow, this tastes a lot better than I thought it would when I saw it,” said my surprised companion upon sampling the final feature night ARTINI. We had seen the bright-pink drink with thick foam dispensed from a whipped cream maker and had braced for something cloying and creamy.

While not off the charts, it certainly was sweet, with St-Germain and brown sugar simple syrup – but the froth on top was a light lemon meringue which dissolved into the drink adding a bit of additional tartness rather than rich dairy. It strongly recalled the childhood candies Sweet Tarts, though I suppose those did not come in blood orange, which gives the drink its bright color and citrus-y flavor. 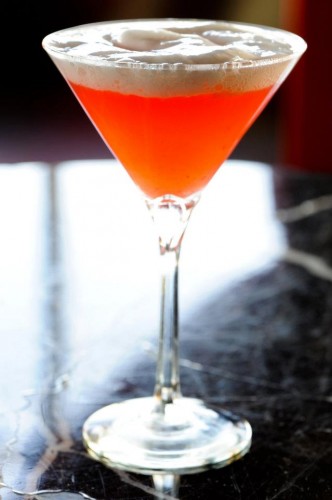 Cocktail created by Joe Ambrose of P.O.V. at the W Hotel for ARTINI 2012. Inspired by Terry Winter's "Theophrastus Garden 2" 1982. Photo by Dan Swartz.

Perhaps the thing this drink tasted the least like was alcohol. The cocktail employed a pre-mixed base of Beefeater gin and Russian Standard vodka, but in the finished product neither could really be particularly detected. It grew on me as I drank it, particularly as the foam integrated, but it failed to be particularly memorable. This drink gave me an impression of a good concept, without strong execution. Blood orange, gin, that lemon meringue, all showed promise – but the final composition was a bit too muddled (and, dare I say, commercial) to really be a notable work of art.

Final thoughts from our intrepid lushes?

Brittany:
With several drinks leaning towards the sugary, I anticipate a lot of hung-over gala attendees on Sunday morning.

Fedward:
It’s hard for me to predict the art component of ARTINI judging, but I’ll say that I felt the drinks I had were consistently more successful cocktails on their own merits than the ones I had last year (although it should be said that Ron Flores must have fixed the problems I had with the house-made Slim Jim in his Coleman’s Juice, given that it was the eventual winner). For creative flavor and texture alone my vote would be with Frank Jones’ Silk Veil, but I wasn’t sure about how it tied in with its inspiration. Alexandra Bookless and Rachel Sergi both nailed the visuals with their cocktails, but I suspect the judges may be won over by Chantal Tseng’s Horsefeather. The earthy, spicy flavor is especially evocative of its inspiration.

Jenn:
With Chantal Tseng, Rachel Sergi and Alexandra Bookless’s cocktails all hitting the high bar for both taste and artistic inspiration, I’m hopeful that the judges and the public agree with me that this year’s ARTINI is all about the ladies. But there’s always last year’s winner Ronald Flores, whose rooibos tea inhanced cocktail will be hard to beat. Whoever wins, it’s sure to be a night filled with gorgeous fashion and boozy, beautiful drinks. ARTINI isn’t a race to see who can drink all eleven cocktails. It’s a chance to sip something exquisite made by a gifted bartender, in an elegant setting surrounded by art, and all for a good cause. Have fun, and hydrate!