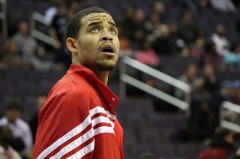 END_OF_DOCUMENT_TOKEN_TO_BE_REPLACED

The Wizards had a little swagger in their step as they took the court Friday night. Coming off a big win over the NBA-best Oklahoma City Thunder, the ‘zards went up against the Denver Nuggets and pummeled them in the first quarter. Washington scored a season-high 37 points and were in the game down to the end.

However the Wizards could not solve Denver’s Al Harrington, who led the Nuggets with 29 points. His dunk with 7.9 seconds left in the game sealed the Wizards’ fate in a 104-108 loss.

END_OF_DOCUMENT_TOKEN_TO_BE_REPLACED

What happened to the defensive stops that the Wizards displayed in their surprise victory over Boston? After following that up with a high scoring loss against the New York Knicks, the Wizards return to the Verizon Center with another high scoring shoot-out defeat against the Denver Nuggets.

The Wizards, who typically shoot 44% from the floor, drained 51% of their shots in the 120-109 loss. Per usual Nick Young led the night with 26 points and Andray Blatche had a great game with 25 points, 15 of them in the first quarter alone. John Wall facilitated the offense with 13 assists.

Sounds like a great night offensively for the Wizards- where did we go wrong?

Denver had a better night.