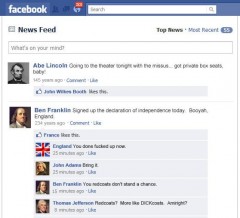 How dumb can you get? Really, really, REALLY dumb. Jonathan Parker, a PA resident, decided to rob stands accused of robbing a house outside of Martinsburg in Berkeley County, WV. But that’s not the dumb part. Ready for this? He checked his Facebook account on the victim’s computer and left it logged in! The Martinsburg Journal (sort of my home newspaper, unfortunately) reports. He apparently stole two diamond rings, in addition to some equipment from the garage. Because of his awesomeness, the police were able to nab him relatively easily.

END_OF_DOCUMENT_TOKEN_TO_BE_REPLACED

I’ve watched over the last six days how an election in Iran was wholesale hijacked, how the people revolted, how they circumvented their government’s heavy-handed filtering of the Internet, and how they used social media tools to keep right on going. So, I present to you, a guy who may well have saved lives and continued a nascent revolution. His name’s Jared Cohen, and he works for the State Department. No, he’s not a new hire, not a product of the Obama Revolution, he’s someone that Secretary Condi Rice hired in 2006 to look at the Middle East, how to talk about the Middle East youth movements, and how to engage with a part of the world that we have a hostile relationship with.

But Cohen’s achievement was picking up the phone over at Foggy Bottom and asking Twitter and NTT to postpone the maintenance window to a time when it wouldn’t have such a drastic consequence on the unfolding of history. Well done, Mr. Cohen. Well done.