Glee fans in the District who want to get their groove on have the option now. That’s right. The Washington DC JCC (1529 16th Street NW) is hosing Tuesday evening classes, five total, starting August 2 with instructor Alvaro Maldonado.

The class costs $70 for member/seniors/people under 25 and $85 for everyone else. Students will learn Jazz, Broadway and Modern dance moves inspired by performances from the hit television series.

For more information on how to register for the class, visit the DC JCC’s website. 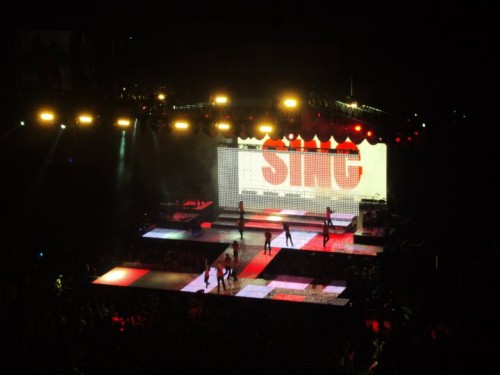 The show’s drawn a devoted group of fans who have deemed themselves “Gleeks.” They are a proud group stretched over a wide range of demographics preaching the same message of acceptance and love of music over all else. Whether you’re a fan of the program or not, it’s impossible to deny the influence Glee has had on an expansive American audience. END_OF_DOCUMENT_TOKEN_TO_BE_REPLACED ‘glee live! at the Honda Center in Anaheim’
courtesy of ‘Loren Javier’

If you’re a Gleek in DC then you know the live show is coming to the Verizon Center THIS Thursday. Thanks to our friends at Chevrolet, we have a couple tickets to giveaway to our fine readers this week!

All we need from you for your chance to win is a name and valid e-mail address in the comments section of this post.

Here are the rules …

Good luck to everybody! If you thought getting tickets to last year’s White House Easter Egg Roll was hard, then imagine what’s going to happen with the addition of a performance by the cast of Fox’s Glee.

Yup, that’s right. They’ll be appearing and performing at the April 5 event, so you should start lining up for tickets today.

Apparently, Michelle, Malia and Sasha are among the shows 2038475 million fans and are super pumped. Wonder if Bo is into Glee.