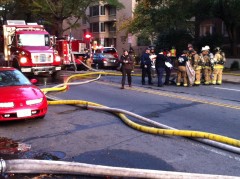 Photographs for We Love DC.

A fire has occurred on the upper floors of a 10-story building on the 1400 block of Rhode Island Avenue in Northwest (Update as of 5:30 p.m. – the apartment is the Windsor House at 1444 Rhode Island Ave. NW).  As of 5:15 p.m., 10-plus fire trucks have gathered in the area, in addition to numerous police cars and ambulances.  People were seen on stretchers, but the extent of injuries is unclear at this time.

Traffic is impacted in the area. Rhode Island is closed between 14th and 15th NW and 15th is closed from Massachusetts to Rhode Island.  It is also noted that 14th Street NW is open going north, but closed off headed south.

Update as 0f 10:23 p.m. – @dcfireems reports via twitter at 9:55 p.m., 21 residents displaced, EMS transported 6 — three civilians and three firefighters. Incident is under investigation but appears to be accidental.

Update as of 7:23 p.m. – @dcfireems reports via twitter at 7:14 p.m., EMS transported 5 — including three civilians and two firefighters.

Update as of 7:03 p.m. – Area still blocked.  Traffic continues to be disrupted.

Update as of 6:04 p.m. – According to fire spokesman Pete Piringer to NBC Washington, several dozen people needed to be evacuated or needed assistance exiting the building. Several people were injured — two seriously — but none of the injuries is believed to be life-threatening. 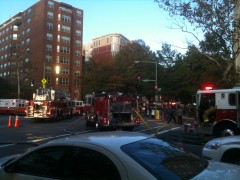 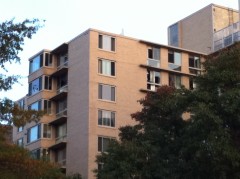 Norwegian, neo-shoegazer, wunderkinds Serena Maneesh (finally!) returned to the DC area on Wednesday night when they played a painfully short but brilliant set at DC9. It has been four long years since Serena Maneesh first brought their mammoth live sound to our area; when they played to an embarrassingly small crowd at the State Theater in 2006. I was one of the lucky few in attendance that night and I have been a babbling fool about this band ever since; singing their praises every time the shoegazer revival is up for discussion and playing just about every track off their first self-titled debut at my DJ nights over the years. If you read my original review and then their #2 spot on my 2006 best shows list, it is obvious how taken I was by their My Bloody Valentine-esque approach to live performance. The State Theater show is one of the best shows I have ever attended. Hence my many years of agony awaiting their return.
END_OF_DOCUMENT_TOKEN_TO_BE_REPLACED