Harry Thomas Jr, seen above at Brookland ribbon cutting, tonight released a statement that he intends to resign his Ward 5 council seat in the morning, and plead guilty to two federal crimes related to $383,000 of city money that was misappropriated by a charity that Thomas operates. In his statement tonight, Thomas said, “Tomorrow morning I will plead guilty to committing two federal crimes. I am resigning my position as a member of the Council effective immediately. I made some very serious mistakes and exhibited inadequate and flawed judgment. I take full responsibility for my actions. I am truly sorry.”

Thomas is expected in court at 11:15am tomorrow for a plea hearing in Federal Court to answer for the charges that were filed against him this morning. A plea deal has been rumored by several media outlets for the last few days, and may contain up to 3 years for Thomas in prison.

A special election would take place on the first Tuesday after 114 days from the certification of the vacancy of Thomas’ seat, which would likely place the election on May 8th or 15th.  Candidates have already begun to appear, with at least six possibilities emerging as prospective candidates in the last few days, to include some of Thomas’ former challengers, including Delano Hunter and Kenyan McDuffie. According to several local sources, the home of Ward 5 Councilmember Harry Thomas Jr. was raided this morning by agents of the Federal Bureau of Investigation and the Treasury Department in connection to an on-going investigation. It’s not immediately clear if this is related to Thomas’ admission that he would return $300,000 of city money earmarked for youth sports goods, or if this is a new charge.

Agents impounded a motorcycle and an SUV at the Thomas house, but have not to date captured Thomas’ Audi that was purchased with that money.

As a Ward 5 resident, I hope that Thomas thinks long and hard before saying anything at Monday’s reading of the Ethics bill before the Council. 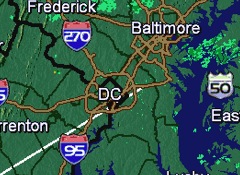 The weather, courtesy of TBD

As we get ready to go home, here’s the latest on the impending snowfizzle, explosions in Arlington, baby lion cubs playing with their dad at the zoo, a timeline on the death of Ali Ahmed Mohammed at DC9, a Verizon iPhone, and more!