How many photos of the Abraham Lincoln statue inside the Lincoln Memorial have you seen? Chances are you’ve seen quite a few of Honest Abe perched in his chair, the weight of the world on his shoulders. A lot of tourists who snap a photo of the iconic statue try to get all of Lincoln in their frame. Or they focus on his head and the inscription on the wall behind him.

I like what J.D. did here: He focused on a single detail of the statue — Lincoln’s right hand. I’ve always felt that the hands on the statue really tell a story. There is so much tension in those hands. Meanwhile, Lincoln’s face is in the background, slightly out of focus. I think the result is a much more interesting photo than the standard full-on shot of a seated Lincoln. 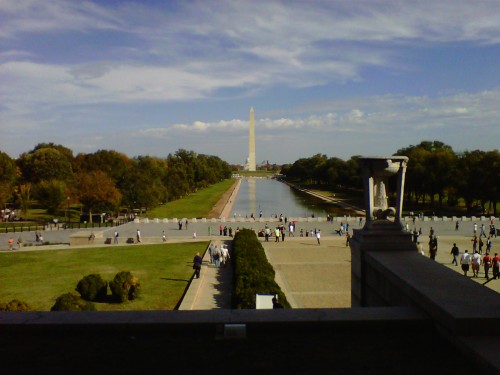 When you live in Washington for long enough, the tourist appeal loses its initial flare. Often times, those of us who announce residency for longer than a Presidential term are left to visit historical sites, memorials, landmarks, and museums when family or friends are here from out of town … or we’ve guilt tripped ourselves into venturing out into the District’s finest attraction – the National Mall. END_OF_DOCUMENT_TOKEN_TO_BE_REPLACED 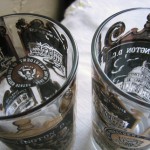 This is not Oklahoma by katyray

All day long, tourists wear down the stone of our monuments a few microns at a time with each step, each touch, huffing and puffing as they climb the stairs.  As a parent or school teacher you have to keep an eye on your flock to make sure they don’t take candy from strangers or fall into the bushes.  As a kid you wonder how you can get your hands on some candy or just how long you can hide in the bushes before you are found.  After a while spent mulling around, possibly reading the first sentence or two of the engraved president’s speech, postcards are purchased and this site gets checked off the list by capturing a bad camera phone trophy.  Come on kids, let’s head to the Hard Rock Cafe for a burger or a nice pig sandwich.

The night guard flips the sign from “open” to “closed”, radios to his buddies that quadrant four is secure, and soon Operation Foxtrot Charlie Delta (five card draw) commences in the bowels of the monument.  Honest Abe breathes a sigh of relief that he’s made it through another day.  He notices that he’s starting to get dirty, no thanks to the pigeons perched on his shoulders and the smog that saturates the air.  What was once a deafening scene of chaos is now peaceful, serene, and calm.  It’s his favorite time of the day.

Suddenly, far away in the darkness of night, Katy Ray’s camera makes a clicking noise that pierces the air, capturing this beautifully simple, grainy image on her Kodak T-MAX 3200 film.  The guards pause in silence, staring at each other, listening for more clicks.  Honest Abe lifts an eyebrow and scans the grounds for any signs of horseplay.  But after a few minutes, the card game resumes and the photographer slinks away into the pitch black as the scene comes to an end, only to be repeated again tomorrow.  And the day after that. ‘Cleaning Up the Potomac’
courtesy of ‘mtngirl9999’

Looking for something to do Saturday? How about volunteering at a local National Public Lands Day site.

Tomorrow marks the 15th anniversary of this event to preserve and protect America’s natural heritage.  Last year brought out more than 120,000 volunteers at over 1,800 locations to assist public land managers with hands-on projects.