The gallery now organizes the paintings thematically and provides textual panels to help visitors understand the reasoning behind the new groupings. In addition, thirteen of the paintings have been restored.

I went last Saturday and was blown away by both the beauty on display and the enthusiasm of the visitors around me. In fact, I was so amazed by the Cézanne pieces that I ran out of time and missed Monet. However that shouldn’t be a problem: the NGA’s price tag (always free) and nearness to Metro mean I can always…Gauguin. Yes, that’s a little Post-Impressionist humor for your Friday.

One of the most-anticipated openings hitting the walls of DC galleries (in a season that is proving to be crowded with buzzed-over exhibits), 30 Americans brings together three decades of influential African-American artists, both household name and lesser-known, in a variety of media. The principle by which they are organized is that all seventy-six works on display (by, in fact, thirty-one American artists) grapple with the concept of identity – particularly but not exclusively race – in modern American life.
END_OF_DOCUMENT_TOKEN_TO_BE_REPLACED 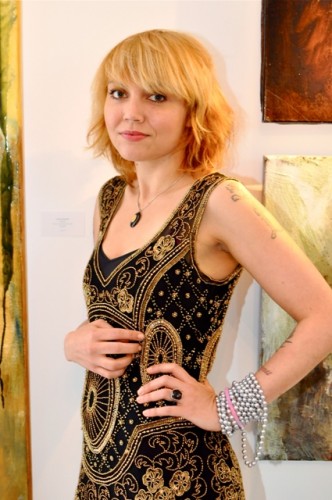 The ghosts of the past are always with us, brushing past in layers of time, like veils in a dance being pulled away. They haunt us with both pain and humor, and to reveal their presence takes honesty and sensitivity as an artist. Not to mention, a bit of detective work.

Every so often an artist’s work hits me with a visceral force, and I knew when I saw a few pieces by Laurel Hausler at the Small Works on Paper exhibit at Morton Fine Art that I needed to see more. Luckily, you can too. Hausler has a full exhibit at MFA showing now through October 14, and I highly recommend a visit to view these wickedly beautiful oil paintings. Heavily layered both by paint and meaning, alternately revealing and concealing, the exhibit is titled Debutantes & Feral Children.

Aren’t we all a bit of both?

Hausler, a native of the DC area now based here as well, paints with a subtractive process – in other words, she begins by covering canvas or paper with many layers of paint which she then removes to reveal the subject. Actually, she first begins with research. Let’s take a closer look. END_OF_DOCUMENT_TOKEN_TO_BE_REPLACED The weather is cooling, cravings for hearty stews are upon us and hibernating within our homes is becoming the norm. As we’ll be spending more and more time inside, hiding from the cold and darkness that winter will bring, it’s time we turn our attention to some of the amazingly creative and fun crafts the fall season brings.

Personally, I’m really big on craft projects that will actually be useful, especially since I just moved and my apartment is in serious need of some decoration. Plus, there’s no better feeling than to finish a project and immediately see your hard work put to good use. I’m BIG on not spending a lot of money. One, because I don’t have the budget and, two, because I tend to have a lot of useless stuff around the house that can be recycled for crafting purposes. I also think that crafts projects should last at max only 4 hours and should be completed by that time.  No one wants to have shreds of felt paper, uncapped glue sticks and newspaper around their apartment for weeks at a time.  My motto: keep crafts simple, fun and doable. END_OF_DOCUMENT_TOKEN_TO_BE_REPLACED