‘Summer in the City’
courtesy of ‘photo_secessionist’

The college students have gone home, taking their ready attention to smaller local comedy shows with them. And in their place? Interns, whose ready attention to things local seems to be limited to wearing their badges on the Metro so you can see how important they are and Cap Hill bars with lax ID-checking policies. So, this month’s local comedy happenings are perhaps a little thinner then usual. But they are interesting, oh yes.

This Friday, June 4th is 3 Chord Comedy at the Velvet Lounge, as usual. The lineup features Brent Sullivan (Comedy Central’s Live at Gotham) headlining, along with locals/former locals Brian Parise, Mike Blejer, and Eli Sairs. Brent Sullivan, in addition to his stand-up comedy, also performs a one-man show called Fag Life: A Conversation with Fred Phelps, which juxtaposes recordings of the famous hatemonger in with Sullivan’s commentary. He’s put the first seven minutes of the show online (visually SFW, but headphones may be appropriate): 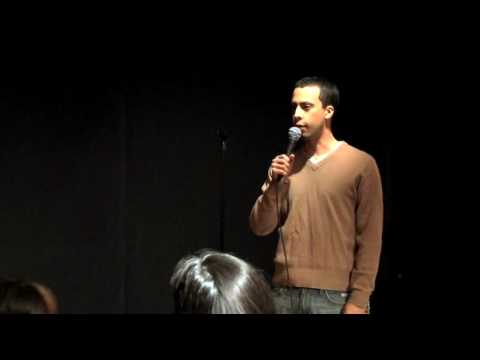 I know making fun of nutjobs like Phelps is like shooting fish in a barrel; he’s so crazy that the jokes should write themselves, but frequently, they don’t. Or they do, but the ridiculousness of the subject generates jokes that are just predictable products of the observer’s rage. One of the things I always find admirable in a comic is when one possesses the ability take things that offend them to the core and turn them into more measured, unexpected pokes at the ridiculous.  Sullivan’s Phelps-mockery does just that and it makes me all the more interested to check him out doing stand-up. Five bucks is well worth it.

Next week, on Thursday the 10th, the Eleventh Street Lounge’s monthly showcase is back. This one is free, and features Chris Barylick, Pat McKee, Anupama Pillalamarri, Courtney Fearrington, Pete Bladel, Lafayette Wright, Emily Ruskowskii, Graham Hall, Evan Valentine, and special guest Jake Young, who has made me laugh so hard I fell off my seat more than once. Young recently moved to NYC to pursue comedy and I keep seeing his New York events crop up in my Facebook feed, which makes me all wistful and crap. And then I’m embarrassed. So I’m glad to see him back for a night, presumably to do a set longer than the strict enforcers of New York open mic nights will allow.