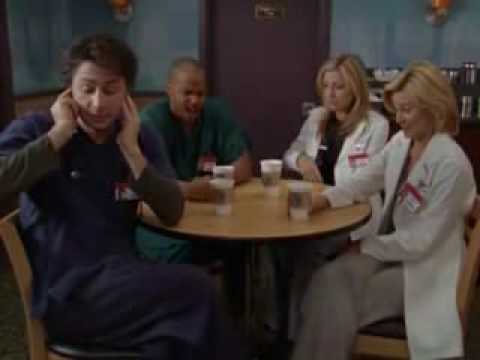 Ok, so the office is probably empty between the holidays and the quarter-inch of snow that is crippling the entire region (no, I’m not bitter at all at this reaction). Still, maybe you will have to have a conversation or two about the Redskins, so we offer the penultimate Cheat Sheet of the season to help you bluster your way through Sunday’s win over the Jaguars.

Things in the 80s and 90s were different. For one thing, the Redskins were respectable. For another thing, television was really predictable (not that the end of Lost took a mastermind to sleuth out). So much, so, that there were certain catchphrases and plots you could completely expect to fill in any campy sitcom. Given some of the text messages that were flying around on Sunday afternoon amongst friends, it seems like a perfect theme to recap yesterday’s win.

I’ll steal the two from the Scrubs clip above, but you’ll want to click through to see how I made them work. Honestly.

Who Are You and What Have You Done With the Washington Redskins – This was the obvious one. To start off the game, the Redskins came out like a football team. Jacksonville is actually having a decent season, and up until they dropped Sunday’s game, they were still alive in the AFC Wild Card picture. Not any longer. The Redskins struck quickly, putting up 10 points quickly after a field goal on the opening drive and then getting into the end zone after an interception on the next Jaguar possession. As the clock ticked away on the first quarter, the Redskins were moving the ball, and it actually seemed like they were even in control.

The “Flashback” Episode – Things somewhat normalized back to the Redskins standard operating procedure on offense in the later portions of the game. You know, low possession time, inability to get the ground game going, dropped passes. It was almost like it was someone was doing a greatest hits flashback episode on the 2010 season. It even had the “let the other team back into it to force overtime, and then win again while scoring 20 points or less like in all other wins this season” clip. A favorite. All this needed was Donovan McNabb falling on the ground on the first snap. Speaking of which…

Is It Just Me, or Does Somebody Need to Switch To Decaf? – Shocker, this award is going to Donovan McNabb. The former Redskins starter spent some time this week publicly dissing the decision that led to him riding some pine on the sideline. Before Sunday’s game, he decided he hadn’t been a pain enough this week. ESPN’s Adam Schefter reported from Jacksonville that McNabb will seek a release from the Redskins so that he can go somewhere where he’ll be wanted and appreciated (he was under contract when acquired by the Skins last spring, and since he’s been re-upped since, another trade or the release is the only way out). Of course, Shanahan, Snyder, et al, probably want something for their draft picks, but who will take on the aging QB and contract?

One more week of bad jokes and stretched metaphors as the Redskins 2010 Cheat Sheet comes to a close with the Giants coming through town for Week 17. See you then.

One thought on “Redskins Cheat Sheet: Week 16 at Jacksonville”