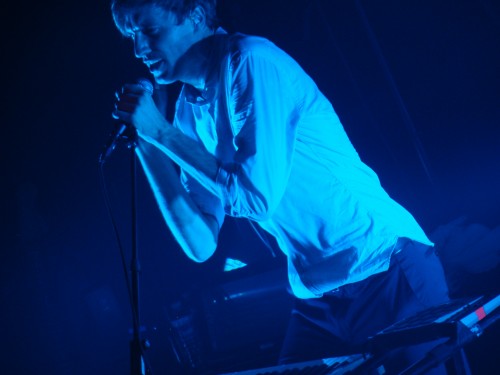 As you may have read earlier, I went down to Miami last weekend for the Ultra Music Festival. Cut Copy and Holy Ghost! performed there, but since I knew I would be seeing them at 9:30 Club on Tuesday night, I opted to skip them at the festival. Ultra turned out to be a fantastic weekend of electronic music and although I was exhausted upon my return, a part of me was very excited to keep the dancing going by going to this show.

Cut Copy are touring on their third album “Zonoscope” and Holy Ghost! are about to release their self-titled debut. Both bands have their new albums on the line, but also Holy Ghost! are trying to make the transition from openers to headliners and Cut Copy are trying to dis-spell rumblings of a band identity crisis. I expected this show to be a high-energy, home-run from both bands. Instead it was an average showing from both that made me suspect that perhaps I wasn’t the only one feeling the post-Ultra hangover.

I arrived right after Holy Ghost! had started their set. I saw the majority of it though and I have a few observations about it. First and foremost, I felt like Holy Ghost! came across as Chromeo-lite. Both bands are part of this neo-disco revival movement and while Chromeo sits at the top of the pile right now, Holy Ghost! are stuck somewhere in the middle of it. Second, while I felt their variety of neo-disco was somewhat mediocre, I thought the live band (a four-piece) played very well together. I know from my interview with Alex Frankel last week, that the band is really just him and his partner Nick but I saw a real strength in the live four-piece and I hope that Holy Ghost! develop more in that direction. As a band I thought they played together tighter than Cut Copy did.

I guess my big issue with all of the neo-disco stuff is the lack of passion in the vocals. In their attempts to be humorous and/or sexy the lyrics and their delivery are too silly to contain any honest emotion or fire. Holy Ghost! suffered from this like many of their peers. At a minimum, the vocals should at least convey the fun of the music – but the vocal performance by Holy Ghost! on Tuesday came across as very flat. The audience seemed to be having a great time during their set though, which I credit to the general popularity of the neo-disco genre and the band’s very tight playing and instrumental chemistry.

Cut Copy have more of an 80’s throwback thing going on than a disco re-hash. Back when I was DJing, I really enjoyed spinning Cut Copy tracks; especially off of their sophomore album “In Ghost Colours”. They always blended well with other synth-based music, 80’s otherwise, and they kept the dance floor moving without fail. I never really had a reason to dig too deeply into their sound though until hearing their latest album “Zonoscope” combined with finally seeing them in concert on Tuesday night. As a whole I would say that Cut Copy is an average live band who uses their mastery in the studio to disguise some of their live short-comings. In short, they are better on their records than they are in concert.

I felt like the majority of the show on Tuesday night was hit or miss and that the band was rushing to keep people from noticing the misses. A rush that was unnecessary because there were more hits than misses. When everything clicked together, the band sounded great and the atmosphere in the room was electric. Overall this was a really fun performance. But there were moments that didn’t really gel together and while they took me out of the show for a moment, they really weren’t that big of a deal. Mistakes and weak vocals happen in live shows, it’s the nature of the thing. I guess I am willing to forgive those kinds of things more than I am the bands need to rush through their set to attempt to cover them up. I wanted some of their songs to breathe. That’s all. Not too much to ask.

The main flaws of the set were the vocals and occasionally the appearance of posing rather than playing instruments. Cut Copy live is a four-piece with an occasional fifth member stepping in on some songs. And yet with all of these hands and all of these instruments on stage, there were many parts of the show when it seemed like someone was just standing around doing nothing. It sort of made me feel like the band are not as proficient as they come across on their recordings.* Vocally, I just felt like the band wasn’t there on Tuesday. Dan Whitford sounded kind of weak on several songs, which really surprised me because on the albums he sings right up there with some of the best of 80’s New Wave.** One of the amusing side effects of Whitford’s vocals occasionally faltering was that for the first time ever I found myself comparing Cut Copy to Men At Work instead of Erasure and Pet Shop Boys.

Cut Copy’s set got better as it went. They started out playing two guitar-centric songs that really made it seem like they want to move away from the synth-pop thing, but thankfully they settled into a more electronic sound as the set progressed. Even when they did play electronically though, it seemed like they were relying on a lot of pre-programmed sequences rather than playing keyboards live. This too shifted as the set moved forward. By set’s end the band were playing much more live synths and less preprogramming and guitars. The band delivered their set with a break-neck pace, so the energy never dipped and the crowd seemed to totally love it. I enjoyed it too, I just wish they had slowed it down a bit to drench us with some synth atmosphere.

It wasn’t until the last quarter of their set that I was truly impressed. With a run of songs that included “Pharaohs & Pyramids”, “Saturdays”, “Hearts on Fire”, and an extended version of “Sun God”. During “Sun God” the band went into a sort of extended synth and guitar noise jam that I enjoyed but would have appreciated more if they had the wherewithal to bring the noise jam back home to close out with a final verse.

* Holy Ghost! on the other hand were all playing various instruments non-stop during their set and looked like a much tighter band of musicians.

** I’ll take a weak-voiced Whitford for an evening over all these crap auto-tune bands any night.