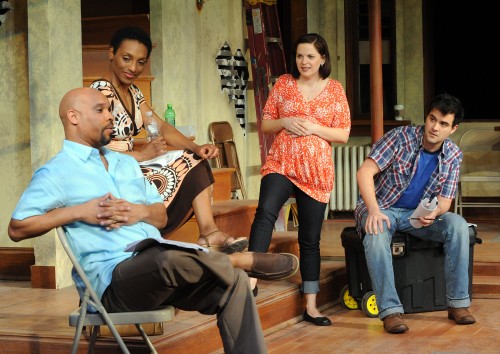 Before this weekend, I rarely used the word gentrify except when describing neighborhoods like Columbia Heights or H-Street NE.

Second was a performance of Bruce Norris’ Clybourne Park over at Woolly Mammoth Theatre. I’m happy to report the latter had a deeper impact on my life.

Woolly Mammoth made a wise choice in restaging the production they first brought to life in the spring of 2010. Not only can DC relate to the theme of race and gentrification, but also the show is still buzzing after winning a Helen Hayes award for outstanding resident play and the Pulitzer in Drama. With local theatre taking a bit of a summer break, crowds have been beating the heat and taking advantage of this second chance to see what I think has been one of the best plays I’ve seen this year.

The play is a spin-off of Lorraine Hansberry’s Raisin in the Sun. Norris takes Raisin and goes further- telling the story of the unseen home that the Younger family eventually purchase in Hansberry’s play. We learn that the home was owned by Russ (Mitchell Hébert) and Bev (Jennifer Mendenhall), who decide to move away when their son Kenneth (Chris Dinolfo) commits suicide after returning from Korean War. The couple are in the midst of packing when they are visited by Karl Lindner (Cody Nickell) from the Clybourne Park neighborhood association (also featured in Raisin in the Sun), who attempts to convince Russ to reconsider selling the home and allowing the African American family to move and spoil Clybourne’s white demographic.

With the given premise I sat down prior to the show and advised my friend Carrie that this, “wasn’t going to be a funny show- it sounds like a serious drama.”

Boy I was wrong.

What I thought was going to be a critically acclaimed drama was actually much lighter than I first expected. While it does become comically awkward when the family housekeeper Francine (Dawn Ursula) is dragged into the middle of the conflict to provide her “view”- I did not expect a Pulitzer winning drama to make me chuckle throughout the show. I give Norris and director Howard Shalwitz credit in avoiding the easier choice of making Clybourne Park darker, serious, and perhaps over the top. The dialogue is sharply written. Norris paints the racial tension of post-war America in the 50’s with subtle, powerful, yet down to earth prose. When Bev delivers a seemingly mundane line like, “It’s nice to know everything has a place,” and “I guess I choose to remain powerless,” it says so much about society back then.

In the second act the show really comes to life, We are taken to the same home almost 60 years later, where a young white couple (Kimberly Gilbert and Nickell) who have their sights set on starting a family moves in. In a fitting reversal of roles, the white couple are now the minority in Clybourne Park, which has evolved into an affluent black neighborhood. The street has morphed into a symbol for the past struggles depicted in the first act. A black couple (Ursula and Jefferson A. Russell) represent the neighborhood association and fear that the new family might be the start of yet another evolution of the street.

Tensions quickly come to a head between all parties in a powerful and emotional end that leaves everything raw and unresolved: much like today’s current state of race and property.

The set is nothing short of breathtaking. Set Designer James Kronzer creates a masterpiece with fitting a beautiful bungalow home on Woolly’s modest stage. The diagonal facing of the home allows for three rows of seats to be placed behind the set, giving some lucky patrons a unique view of the action as they watch the show through the house’s rear bay window only a couple of feet away from the action. I also couldn’t think of a better local ensemble to take on the dual roles between the 1950’s Act I and present day Act II than the one Woolly has assembled. I am a big fan of both Hébert from Signature Theatre’s Art and Mendenhall from Studio’s Circle Mirror Transformation.

Walking out of the theatre my friend Carrie said she was left with more questions than answers- a sure sign that Clybourne Park is through and through a true Woolly Mammoth show, one that you really must catch before the curtain falls on this second run.