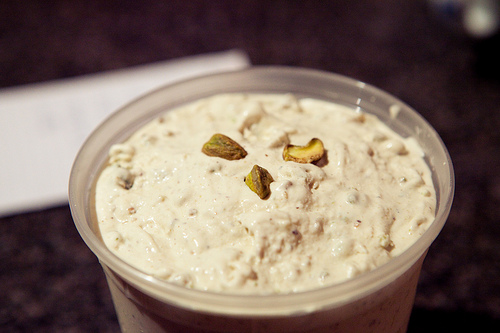 According to the interwebz, the creation of pistachio ice cream is attributed to James W. Parkinson of Philadelphia, who was the son of George and Eleanor Parkinson, a couple that made Philadelphia ice cream famous in  the nineteenth century. As a professionally trained chef, Mr. Parkinson was exposed to a widening variety of cooking techniques and international spices, from which he probably developed the idea to make a pistachio nut flavored ice cream.  And what a fantastic idea it was. END_OF_DOCUMENT_TOKEN_TO_BE_REPLACED

So Tom points me to an announcement on Cold Stone Creamery’s website, regarding their promotion of two new flavors and their partnership with the Make-A-Wish Foundation during the month of September. And apparently, tonight is also the 7th Annual World’s Largest Ice Cream Social at all CSC locations from 5-8 p.m, where they’re giving out free ice cream. (Icecreampocalypse, anyone?)

I totally don’t have anything against M-A-W; my sister was a recipient of theirs a year before she passed away. I do, however, continue my lingering grumpiness with the Alexandria CSC location. (They’ve still not sent coupons or called to apologize!) If I could have a wish resolved from M-A-W, it’d be “I wish this CSC would have a faster line!“