The FBI and the Justice Department brought down 10 suspected spies this afternoon across the country, including three from right here in Arlington. Several sources are reporting the details, including this article from CNN, and talk to the fact that these Russian secret agents were reportedly sent to the US for long-term operations and were to fully adapt to our way of life (marriage, kids, house, mini-vans…and the true American dream of  balloon mortgage payments says Wonkette). The article also includes details of some of the intercepted and decrypted messages that Russia reportedly sent to these agents.

“Your education, bank accounts, car, house, etc. — all these serve one goal: fulfill your main mission, i.e., to search and develop ties in policymaking circles in U.S. and send intels (intelligence reports),” the document said.“

END_OF_DOCUMENT_TOKEN_TO_BE_REPLACED 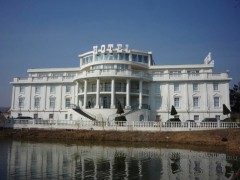 Is that the White House… by a river? Nope, look again — it’s the Senator’s Park Hotel in Kiev, Ukraine!

Built to closely resemble DC’s own White House, Senator’s Park is “committed to providing visitors with an authentic and luxurious American experience without ever having to leave Ukraine!” There’s even a Barack Obama cutout by the door to make the experience even more authentically American.