The Constellations have a two and a half year rotating line-up change to blame for their eclectic approach to music making. For frontman Elijah Jones and the rest of the gang, the studio is the playground and the instruments are the toys. END_OF_DOCUMENT_TOKEN_TO_BE_REPLACED 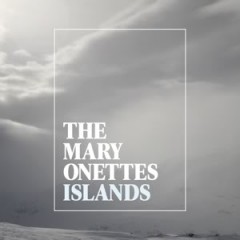 Hot Ticket is a column where I occasionally highlight an excellent upcoming concert that might not ping on your sonar otherwise.

On Tuesday, April 20th, The Mary Onettes (of Sweden) will bring their perfected brand of doomed romance, indie-pop to DC9. The Mary Onettes are touring to support their excellent second album, Islands.

I have never seen The Mary Onettes perform live but have been a fan of their music for a long time. I am very excited for the chance to see them, especially at such an intimate venue. Their concerts have received rave reviews calling their live performance magical and grandiose, while applauding their subjugation and mastery of their chosen stylistic niche.

The Mary Onettes’ sound is in the vein Echo & The Bunnymen, Simple Minds, and New Order. They create emotional, sweeping, synth and guitar based tunes that hark back to the heyday of the gloomy romantic singer: a character usually seen sporting all black, walking along an anonymous cement embankment on a gray day, while lamenting how the world just won’t let him be with his lady love. It is epic, tragic, fun stuff that offers a great nostalgia vibe while providing a new millennium update on a sound that was largely absent from music in the 1990’s. At the same time, The Mary Onettes play this music with complete seriousness. There isn’t a trace of hip irony in their songs. Instead there is a refreshing honesty that lends actual emotion to their music. The Mary Onettes are a band that try to revive the lost romantic in us all.

I think this show is going to be a real stunner. The synths and guitars are going to sound great at DC9. And I can not even imagine what it is going to be like standing that close to Philip Ekström while he croons tunes that are meant to be sung across massive canyons and raging rivers to his love on the other side.

Norwegian, neo-shoegazer, wunderkinds Serena Maneesh (finally!) returned to the DC area on Wednesday night when they played a painfully short but brilliant set at DC9. It has been four long years since Serena Maneesh first brought their mammoth live sound to our area; when they played to an embarrassingly small crowd at the State Theater in 2006. I was one of the lucky few in attendance that night and I have been a babbling fool about this band ever since; singing their praises every time the shoegazer revival is up for discussion and playing just about every track off their first self-titled debut at my DJ nights over the years. If you read my original review and then their #2 spot on my 2006 best shows list, it is obvious how taken I was by their My Bloody Valentine-esque approach to live performance. The State Theater show is one of the best shows I have ever attended. Hence my many years of agony awaiting their return.
END_OF_DOCUMENT_TOKEN_TO_BE_REPLACED Every band’s gotta start somewhere. Last month, we took a look at local acts at local venues. The homegrown groups got some sweet, sweet lovin’ via your attendance at their shows. April, the first full month of spring, calls for a savory new way to titillate your aesthetic sense. Here are five concerts to catch at the hometown venues you’ve learned to love with up-and-coming east coast (and Canadian!) musicians, air guitar pros, and a personal favorite of mine (aka live jazz). END_OF_DOCUMENT_TOKEN_TO_BE_REPLACED

Ever felt like going to a concert that your “kindly pun-loving English teacher would love“? While the answer to this question is, “Um….probably not,” I urge you to change that answer.

Three piece band Phil and the Osophers are a group of indie rockers who lend a great deal of thought to each word chosen while crafting their song lyrics. They can be found opening for A Sunny Day in Glasgow with Faux Slang this Sunday night at DC9 for an 8:30 p.m., 18+ show. Tickets are $10. On Wednesday night, DC9 played host to Adam Franklin & The Bolts of Melody as they made DC the second stop of their month-long American tour. The small venue proved the ideal spot to observe and enjoy Franklin’s guitar alchemy and emotional vocal delivery up close and personal. The band put on a really special set for the modest-sized crowd of Swervedriver fan-boys and guitar-geeks who braved the winter’s chill to catch this mid-week show.

This is where every review and article on the planet about The Bolts of Melody offers a quick rundown of Adam Franklin‘s prolific career. If you don’t know the man you can read about Swervedriver (personal favs of mine), the interesting Toshack Highway project, and Magnetic Morning on your own dime. For our purposes what is really important is that after many years of self-imposed exile from effects-pedal, guitar work Adam Franklin, one of the very best, has returned.
END_OF_DOCUMENT_TOKEN_TO_BE_REPLACED Tonight at DC9, local bands including The Moderate, Alex Gruenburg, and Frau Eva come together for a sweet $10 show to benefit Survivors and Advocates for Empowerment (SAFE). SAFE empowers survivors of domestic violence here in DC and helps them navigate the legal system and get out of their bad situations. So come out and support both the local music scene and a great organization tonight!

It’s kind of hard for me to describe the dance party scene in DC, because I have kind of a stream-of-consciousness reaction that involves the words “awesome” “super fun” and “pure joy.” Perhaps the best way to start is to tell you what it’s not: it’s not the club scene. Sure, both involve dancing, but everything from the kind of dancing to the music being played is completely different. There’s no velvet rope with a bouncer letting in the right amount of girls and guys, there’s no Top 40 playlist, and there isn’t even any bumping and grinding (unless you really want to). END_OF_DOCUMENT_TOKEN_TO_BE_REPLACED “Are you sure this is the right place?”

I was witnessing a mesmerizing scene, social tension galore. The speaking girl’s perfect blonde updo was trembling as she stood in line with her equally coiffed crew. Deposited by a cab with a gaggle of well-heeled preps, it was obvious she’d never hit this part of town before. But leading the way was a wild-eyed boy with a ringleader look that said – you will get out of your comfort zone, my friends – and so the girls followed him in, wide-eyed, longing for L2 Lounge. Instead they got DC9.

I’m teasing, I’m sure they had a raring good time dancing their solid gold hearts out. For a while, this girl’s nervousness was justified. There wasn’t much at the corner of 9th & U until DC9 became hipster paradise, and I’ve seen a lot of shady activity on that block over the years. Nowadays, the action is really centered around Nellie’s, which spills out on the sidewalk with lots of beautiful boys. I don’t see how you could still be nervous about the neighborhood when you see that party. But, we live in a segregated nightlife city, in more ways than just race.

DC9 carries the distinction of being one of the most unpretentious dive spots in the city. Equal parts bar, dance club and music venue, it’s been the indie hangout since its opening in 2004, fitting somewhere between the Black Cat’s Red Room and the H Street corridor on the rotation list. The fact that those tight button-down kids I mentioned earlier could get swallowed whole and turn into loose dancing fools upon hitting the upstairs is one of the reasons I love this place.

Another reason is that it’s pure evil.
END_OF_DOCUMENT_TOKEN_TO_BE_REPLACED

Dust off those dancin’ shoes, because the district is chock full of options for getting your groove on this weekend. Tonight is Rock and Roll Hotel’s free Epic Dance Party, with mash-ups of 50 Cent and golden oldies, and DC9‘s Liberation Dance Party ($6). Last time I went to Liberation, it was a great time but the room filled up quickly, so get there early!

I still can’t decide between the Black Cat‘s two options for Saturday night: Mousetrap, full of fun Britpop, or local band Ra Ra Rasputin, which has been described as “a sugar rush of catchy exuberant rock that has no problem keeping their captivated crowd moving.” Decisions, decisions!