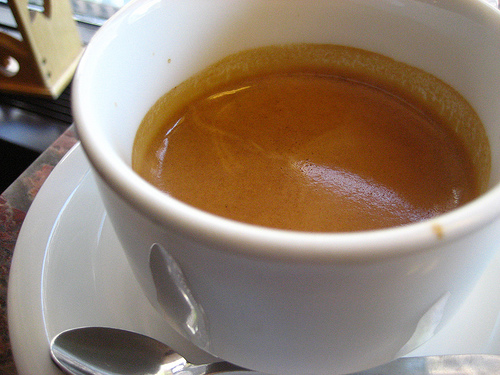 "espresso at m.e. swing coffee roasters" by tvol, on Flickr

For many of us, it’s coffee, not liquor, that’s our “water of life.” I’m quite certain I could survive without alcohol. But I know I could never live without caffeine. I’ve tried really really hard to give it up, especially when I was diagnosed with a heart murmur and began to notice every jitter and flutter. I fell off that wagon so many times I have a permanent head bump. Inevitably I’ve given up giving up, rationalizing that I’m just a much better person on caffeine.

But DC has a bit of a coffee culture problem. It’s hard for little independent cafes to survive (witness the deaths of Sparky’s, 14U, Mocha Hut, Mayorga, Murky Coffee…). Sometimes it seems we’ve given over to the Great Dairy Mermaid and her bitter rival the Loose Moose (wait, it’s the mermaid’s grinds that are really bitter, but I digress) that populate every corner plying milky sugary bastardized versions of the classics.

I know, I know, you can’t give up your vanilla syrup. It’s ok. I’m not going to repeat my last rant about the decline of the perfect cappuccino. I’m not going to wax poetical about espresso in Venice or cafe au lait in Paris. Everybody has their particular coffee fixation – drip, press, etc. The uniting point is that there are some fine places to get your fix, ah, enjoy your coffee, here in DC, beyond the glut of mass market methadone. And with the news that Murky’s being reinvented in Chinatown, and a new coffeehouse called Mid-City Cafe will hit 14th Street, things could be looking up. So here’s a sampling of java joints to get your joy jitters on – and please leave your favorites in the comments.

Sip of Seattle
This unassuming little slice of a spot, manned by the best and friendliest family of baristas in town, is my go-to spot for morning cappuccino or mocha. Always the perfect balance between frothed milk and espresso, and their small is an actual 8 ounce serving, which is just the right size for my murmuring heart. I love how at mid-morning and mid-afternoon it becomes the spot for the Inter-American Development Bank crowd, snazzy dressers all gossiping over their coffee served in china. I have never had a bitter nasty tasting cup of caffeine poison here. The single espresso shot is pure nectar. They rock. Every barista in the city should go to “the Sip” and learn from the pros.

Cornucopia
It doesn’t get much closer to Italy than Ibrahim Selmy’s lovely import shop where in addition to fantastic coffee you can get all sorts of authentic goodies including quite the spread of antipasti and pastries to die for. But it’s his way with the perfect cup that keeps me coming back. Being as Ebo is both Sicilian and Egyptian, he knows how to craft the perfect cappuccino and his espresso will always have rich crema. There’s a sign in the shop that says it all – “Ebo’s Coffee is Nero Come La Notte, Forte Come un Peccato, Dolce Come L’amore, Caldo Come L’inferno”… sigh.

Azi’s Cafe
One of the first pioneers around the Convention Center, Azeb Desta’s warmly painted cafe was voted Best New Shaw Business in 2005, its orange walls glowing as happily as your buzz. It continues to entice locals to hang out, enjoying free wi-fi and decent nosh, while being watched over by the very sweet Azi herself, who strives to make it a true neighborhood cafe. If you’re an Illy fan, get your fix here.

Big Bear Cafe
If you like your coffee with a conscience, they are all over it at this Bloomingdale cafe, serving Counter Culture Coffee. They are heavily anti-artificial sweeteners, and pour drinks based on the classic sizes (espresso 3.5 ounces, cappuccino 6.5 ounces, etc) which may be precious to some but I think is rather endearing in this supersized world.

Of course there’s still Soho Tea & Coffee in Dupont, which has that crunchy-granola-art-student feel, and Tryst in Adams Morgan, which has that checking-you-out-over-my-laptop-glare vibe (it also seems to still be the only coffeehouse open late). I’ll have to give First Cup Cafe a try, taking over for Breakwell’s in Shaw. And our own Acacia recommends Sidamo on H Street.

So sound off on your favorite places. Maybe we don’t have a lack of coffee culture here after all!