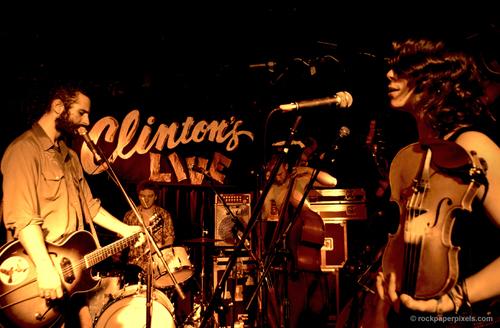 The latest name variation and line-up incarnation of Efrim Menuck’s Canadian post-rock outfit, Thee Silver Mt. Zion Memorial Orchestra, played to a sparsely attended show at the Black Cat on Wednesday night in support of their latest album, “Kollaps Tradixionales“. Too easily dismissed by many music fans because of its off-shoot from Godspeed You Black Emperor status, Silver Mt. Zion is in its own right one of the mightiest live post-rock acts going. A fact that they proved again and again during their amazing set on Wednesday night. This show was so damn good that I actually felt bad for the nay-sayers, the second-guessers, and the lazy who missed out on Silver Mt. Zion’s unique and powerful performance.

Silver Mt. Zion offered up a bounty of genre signature moments while putting their unique stamp on the quiet-loud-quiet, long-song structure by using traditional string instruments and (gasp) vocals!* Only in the live setting does one truly begin to realize just how special this band’s music is. First, there is only one electric guitar in this band. One. The rest of their post-rock racket is generated by a dual-violin attack, a stand-up double-bass, and intense drumming. Watching and hearing these strings rival Explosions in The Sky at their most violent is a thing of beauty. The violinists Jessica Moss and Sophie Trudeau provided all manner of furious strum, intricate tension, and screeching high-notes. Thierry Amar on the double-bass was particularly powerful as he expertly strummed and plucked his instrument, offering a deep rhythm alternately in-time or contrasting with the drums. The new drummer, David Payant, played brilliantly adding a forceful boost to their already potent live show. He also excelled in the many quiet moments by working his drum-kit for all kinds of magical sound effects and quiet, abstract beats. Over, under, and within this dense, tense, thick curtain of sound Efrim Menuck used his guitar to maximum effect through the night. At times he would deliver a heroic lead guitar line, others he would pull back fuzzily playing in the background, and at just the right moment during each epic-length song he would unleash that perfect, massive sound that gives all the post-rock geeks goose-bumps.

Much like Spectrum last week, I saw Thee Silver Mt. Zion Memorial Orchestra play at All Tomorrow’s Parties NY in 2008. And much like the Spectrum show last week trumped their 2008 set, Wednesday night’s Silver Mt. Zion show decimated their 2008 performance. The combination of Silver Mt. Zion’s new material and their new drummer is what did the trick. They played a handful of new album songs, the best being the audience requested and seemingly on the fly performed “There is a Light” (which just might be the highlight of the whole show). There was a series of solitary drum hits during ’13 Blues for 13 Moons’ that were by far the most powerful and impressive sounding thing that I have heard a drummer do all year. Payant made these drum hits so dramatic and forceful that not only did I physically feel them, I can still hear them echoing when I close my eyes. They are burned into my memory like the gunshot that killed Old Yeller.

The other wonderfully haunting memory of Wednesday’s show is the incredible vocal work. Too much hay is made of Efrim Menuck’s high-pitched voice. I can see how it can be initially off-putting, but in the live-setting it is truly inspiring. The man writes incredible song lyrics and he delivers them so passionately and creatively that once you see him perform you are forever converted. Often backing away from the microphone and screaming over the music, Menuck’s passion was on full display Wednesday night. It was fascinating to watch him move his head around the microphone while he sang for different volume effect as well. It was the most basic form of live production and yet it added layers of depth to the performance. The real vocal secret weapon of Silver Mt. Zion is their live harmonizing and staggered choruses. Through-out the night both violinists, the bass player, and Menuck delivered magical and heart-breaking vocal inter-play. None more so than their staggered ending-chorus of ‘God Bless Our Dead Marines’. I get chills just thinking about it.