Often, I find that through the glimpse of someone else’s eyes and perspectives, we’re given a mirror to gaze into our own lives and see where we are, what we’re missing, and what we can hope to achieve. We wrote quite a few interviews and features on people who live, work, and/or visit the DC area this year and I wanted to take a moment and point out some of the ones that really stand out. I hope you take a moment to dive into these great features and either revisit some old friends, or find your own inspiration to make a better 2012.

First off, there’s Capital Chefs: Allison Sosna of DC Central Kitchens. I admit, I love reading about people who do inspiring things and help others in our community. I completely forgot about Marissa’s interview of Chef Sosna until I was looking through our past articles and remembered that she was also on a November episode of Chopped on Food Network.

Dedicated to helping kids form a better relationship with food and healthy eating, her mentoring of the DCCK chef staff and commitment to the organization’s mission is something of note.

Michael Darpino had a chance to get a few words from the tight-lipped Henry Rollins back in February, scoring an interview that was very lively to read. Not one for a lot of words, Rollins spoke volumes about himself and his views of life with his clipped answers. Through that, we were treated with a glimpse into his mind and methods.

Probably the more odder interviews I’ve had in quite a while came from Annie Jacobsen, author of a new book on Area 51. The assertions and “revelations” in her latest work (Russian midgets in a saucer!) were definitely eyebrow raising. And of course, the discussion of secret programs and other projects at the classified area in Groom Lake, Nevada is always fodder for the water cooler. 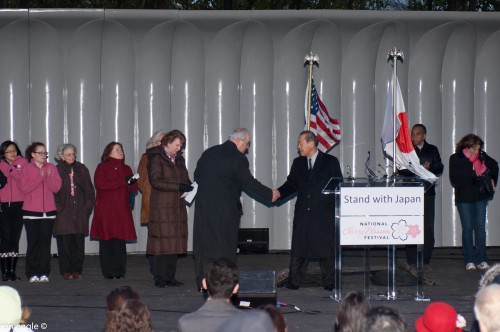 My interview with National Cherry Blossom Festival President Diana Mayhew back in March revealed just how complex planning for the DC’s annual tradition can be. The Festival heavily relies on volunteers to make things happen and the upcoming 100 year anniversary is no exception.

The NCBF battles weather and bloom forecasts each year but found itself facing a different challenge in 2011 because of the earthquake and tsunami that hit northern Japan. Mayhew and her team went into overdrive to collect donations of all kinds for the affected people and still managed to present our area’s beautiful blooms to visitors and locals alike.

Back in August, Chris caught up with Jason Mendelson, the “Metro Music Man.” Around here, Metro usually invokes images of packed platforms, late trains, and constant misery. But for this Alexandria resident, our transit system was the inspiration for a series of songs, a musical mission to encapsulate the flavor of every station on the circuit. Fascinating stuff.

Rachel‘s self-interview about the National Mall is also worth a mention. Written more as an introspective into her own memories of the Mall and the Lincoln Memorial, it causes us to pause and reflect on our own pathways to the present. How many of us have places in this city that gives us similar pause? And how much have we changed since we first laid eyes on them? As I mentioned earlier, Metro is one of this area’s most confounding organizations. A necessity for many and convienence for others, it is most identified as a source of commuter headache. Back in February, WMATA named Richard Sarles their new CEO, and Samer had a chance to sit in on a “blogger roundtable” with the new chief. Their discussions gave a semblance of hope to all of us at a time when the agency was embroiled in fare hikes, route changes, and other issues. It’s a very interesting look at the man who inherited a mess of a transit system, and what his game plan would be moving forward.

Probably one of my most interesting and fun interviews this year was one with Emil Her Many Horses of the Smithsonian’s National Museum of the American Indian. Conducted during a preview of the museum’s newest exhibit (A Song for the Horse Nation), it was both educational and personal. To discover a thread that weaves not just an individual life, but that of community and society, is an epic journey we should all strive to undertake. Our lives are more colorful and vibrant for it.

We hope you’ve enjoyed the many glimpses we’ve given in these and other people’s lives over the last year. We look forward to new faces, new voices, and new opportunities to share, educate, and inspire in 2012. Have a great New Year!