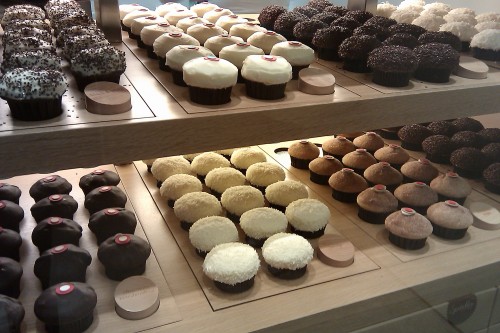 There is a new edition to the saturated DC cupcake scene and it comes to M Street in Georgetown in the form of a pink and brown row house. Sprinkles Cupcakes, started in 2002 by Candace Nelson and her husband Charles, opened  in 2002 in Beverly Hills, is the Magnolia Bakery of the West Coast and has been featured on Oprah, Entourage and The Today Show.

With the proximity of so many other cupcake options (Baked & Wired, Georgetown Cupcake, Scoops, etc.,) offering high quality cupcakes and all priced relatively equally at $2.50 – $4 per cupcake, the principal question is: what makes Sprinkles’ sugary treats different? END_OF_DOCUMENT_TOKEN_TO_BE_REPLACED While some might argued that the cupcake craze has jumped the shark, there’s something sweet (pun intended,) charming and inspirational about two sisters quitting their finance and fashion industry jobs to join forces and simply bake cupcakes. According to co-owner Sophie LaMontagne, the two sisters originally defined success as “making the rent and baking with their mom at their side.” LaMontagne exuberantly added “I get to come to work in sweatpants and make cupcakes!” Got to admit that sure beats pantyhose. END_OF_DOCUMENT_TOKEN_TO_BE_REPLACED

‘Southern Belle (160/365) (005/365)’
courtesy of ‘kimberlyfaye’
Yup, that’s right.  We’ve got another sweettooth focused shop opening in DC.  But seriously, can you really have too many options when it comes to confections?  My answer: No.

Something Sweet, the newest member of the cupcake community, opens this week at 3706 Macomb Street NW, right across the street from 2 Amys pizza and Cactus Cantina.  Owned by the same group of restauranteurs as Surfside, The Rookery, Jetties, and The Bull Pen, Something offers goodies beyond just cupcakes, like brownies, coffee, sweets and more.  Could be a great post dinner stop.