Good news! The DC population is at its highest in over 20 years … and it’s still growing!

WaPo says that this surge in residency pertains to the recent recession and housing market crisis but I think that’s too easy of an answer. The real reason people are sticking around is simple — DC is hiring.

END_OF_DOCUMENT_TOKEN_TO_BE_REPLACED $175 million. That is the current projected budget gap for Metro for the fiscal year. That is a gap some $30m larger than what was predicted just three months ago and you may be paying the difference. WaPo wrote today that Metro’s managers recommended this morning that up to $92 million of that gap be made up through fare hikes. That would require a full 25 cent increase on each fare, bus and rail, to cover 50% of the total shortfall. But why is Metro even worse off than expected?

Well revenues are down, of course. Way down. But why?

Officials said the main reason for the growing gap is the bad economy, which has meant fewer riders and less revenue.

Friends, you and I and everyone in between know that the economy, however recessed it might be, is NOT the reason Metro’s revenues are falling like crazy. Job loss is not why ridership is far below estimates. Does anyone even remotely believe this? Of course the economy has hurt every business, and Metro has to be run like a business (sort of). But COME ON WMATA. Walk up to a mirror and the answer to your falling revenue will look you right straight in the face.

END_OF_DOCUMENT_TOKEN_TO_BE_REPLACED

The Newseum has cut 29 people from its full-time staff, trimming down for the second time since its April 2008 reopening. The cuts came late last month. The floor staff saw only minor cutbacks and the museum president, Kenneth Paulson, has stated that the cuts “should not affect the experience of museum visitors.”

Fundraising seems to be the culprit for the Newseum, which is not a federally subsidized museum. Paulson indicated that the museum had fewer new donors that caused the facility to fall short of its budgeted pledges by about 20 percent.

Across the Mall (relatively speaking), the Smithsonian Institution has received over 150 responses to a voluntary buyout plan it announced in September. The Smithsonian stated earlier this fall that it wanted to trim its staff for economic reasons, especially due to large declines in its endowment. In 2003, when the institution last offered a buyout, 238 employees left. Officials have said that with the tighter operational budget for 2010, no buyouts would be offered next year. 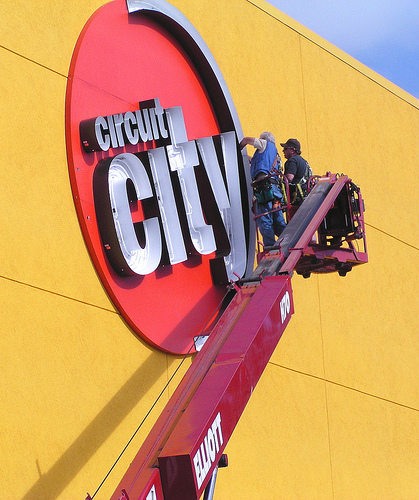 The Washington Post reports that Circuit City is closing 155 stores nationwide in an effort to reduce costs and weather the current economic storm.

So, what does that mean to us DC people?  Well, the stores that are closing (including locations in Baltimore, Beltsville, Marlow Heights, Charlottesville, Manassas, and McLean) will be closed tomorrow, November 4.  On November 5 they will open with store-closing sales.  All merchandise must go.

If you have your Christmas lists handy, this might be a good time to head to one and see what kind of pre-Black Friday sales you can find. The economy is a mess. Our 401(k)’s are toast. And we’re all stressed. Now the WaPo has quantified our job-loss fears:

In September, there were more mass layoffs — instances in which employers slashed 50 or more jobs at one time — than in any month since September 2001, the Labor Department said yesterday. And nearly half a million Americans have filed new claims for unemployment benefits in each of the past four weeks, the highest rate of such claims since just after the terrorist attacks seven years ago. Anecdotal reports suggest that the hemorrhaging in the job market has only begun.

I know all the banking headlines and Dow drops have me scared to open the morning paper. Yet until recently I felt immune.

This is Washington, where the Federal Government is a steady employer, where the Pentagon still spends billions every day, and where power is shifting with the resurgence of Federal financial oversight. On a personal level, knock on wood, my company is okay. We have most of our funding secured through 2009, though after that…